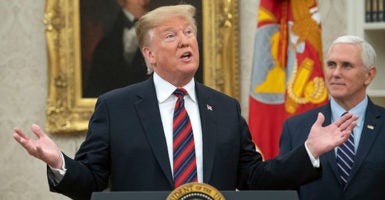 President Donald Trump makes remarks as he hosts a naturalization ceremony Saturday in the Oval Office. Looking on at right is Vice President Mike Pence. Moments later, he delivered remarks about a compromise proposal to end the government shutdown. (Photo: Ron Sachs/Getty Images)

President Donald Trump offered to expand amnesty for certain young illegal immigrants in exchange for money to pay for a border barrier as a compromise to end the partial government shutdown.

“This is a commonsense compromise both parties should embrace,” Trump said Saturday in a nationally televised speech from the White House.

Democratic leaders have already said they would oppose the Trump compromise, so the partial shutdown of 25 percent of the federal government will likely continue for a while.

“The radical left can never control our borders. I will never let it happen. Walls are not immoral,” the president continued during the speech. “In fact, they are the opposite of immoral, because they will save many lives and stop drugs from pouring into our country.”

During the remarks, Trump laid out a plan that would include the $5.7 billion he requested for construction of additional 230 miles of a steel border wall.

His offer to Democrats is three years of relief for recipients of the Obama-era Deferred Action for Childhood Arrivals program and another three-year extension for those for whom DACA protection is about to expire. DACA recipients are illegal immigrants brought to the United States by their parents.

Trump talked about the crimes, murder, drugs, and rape that result from illegal immigration, as well as the humanitarian crisis among migrants traveling to reach the United States.

“It’s got to end now. These are not talking points, these are the heartbreaking realities that are hurting innocent, precious human beings every single day on both sides of the border,” Trump said. “As a candidate for president, I promised I would fix this crisis, and I intend to keep that promise.”

Trump’s remarks come as another migrant caravan from Central America is moving toward the U.S. southern border. It also came moments after he spoke to an Oval Office naturalization ceremony that was held for legal immigrants that became citizens on Saturday.

Trump said Senate Majority Leader Mitch McConnell, R-Ky., will bring the proposal up for a vote next week.

House Speaker Nancy Pelosi, D-Calif., issued a statement opposing the Trump proposal before the president delivered the speech. However, she said the House would vote on its own counter proposal in the next week that did not include a wall—or DACA—to reopen the government.

Trump framed the wall as a reasonable project.

“This is not a 2,000-mile concrete structure from sea to sea,” the president said. “These are steel barriers in high-priority locations.”

Trump deserves credit for trying to secure the border, but his proposed compromise is not the best way forward, said James Carafano, vice president for national security and foreign policy at The Heritage Foundation.

“Amnesty encourages further illegal immigration, incentivizes the tragedy of human trafficking, and undermines our citizens’ confidence in the rule of law,” Carafano said in a statement. “Amnesty should not be part of any border security deal, especially given that many who today oppose a wall have publicly supported and even voted for physical barriers in the recent past.”

“It is unlikely that any one of these provisions alone would pass the House, and taken together, they are a non-starter,” Pelosi said in her statement. “For one thing, this proposal does not include the permanent solution for the Dreamers and TPS [Temporary Protected Status] recipients that our country needs and supports.”

Pelosi said Democrats support increasing the number of immigration judges and new technology to stop drugs and weapons from coming across the border.

“Next week, Democrats will pass a package of six bills agreed to by House and Senate negotiators and other legislation to re-open government so that we can fully negotiate on border security proposals.” Pelosi said.