I Went to the Women’s March. Here Are 6 Things I Saw. 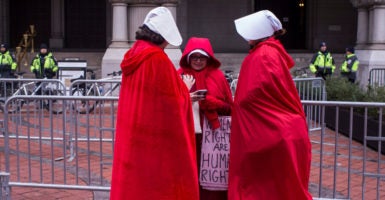 Some signs in this article contain adult language.

Thousands of people gathered in Washington, D.C., Saturday to participate in the third annual Women’s March.

The organization hosting the March has faced criticism due to its founders’ ties to Louis Farrakhan, the leader of the Nation of Islam who led chants of “Death to America” and “Death to Israel” in Iran.

The Democratic National Committee pulled its partnership from the Women’s March earlier this week.

I checked out the event for The Daily Signal, observing the march and talking with attendees.

During the march itself, attendees chanted, “This is what democracy looks like,” and “Shame on you,” while marching past Trump International Hotel, as well as “What do we want? Justice! When do we want it? Now!”

1. A March for Women Being Made Into a Trump Protest

I found it ironic that a march that describes itself as an event to advocate “women’s rights” included such a large amount of signs and memorabilia protesting President Donald Trump.

Rather than putting the focus on specific women’s issues, the yearly march looked like merely an anti-Trump protest.

2. Support for Women, Except Preborn Women

While the Women’s March says it is about “dismantling systems of oppression through nonviolent resistance and building inclusive structures,” there was a strong presence of pro-abortion advocates at the march.

There were also multiple women I spoke with at the march who said that they might not personally support abortion, but wouldn’t want to remove that “right” for other women.

On Friday, I attended the March for Life rally ahead of the 46th annual March for Life and did not encounter one sign with offensive or vulgar language.

The Women’s March was a different story, and like other “civil rights” and LGBT rights marches I’ve gone to or observed, it explicitly included signs, T-shirts, and other memorabilia using profanity and offensive language.

4. A Hatred for Conservative Politicians …

The partial government shutdown reached its 29th day Saturday due to the Trump administration and Democrats failing to come to an agreement over the $5.7 billion for a barrier along the southern border the president has requested.

6. The Idea That Effective “Feminism” Is Angry

Multiple signs at the Women’s March touted that idea that compelling and change-oriented “feminism” is angry, and that women must use terms like “vagenda” to further their cause.