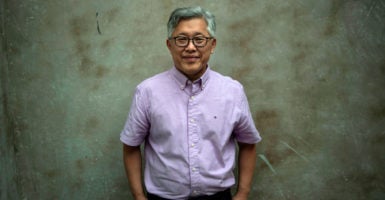 This photo taken on Sept. 12, 2018, shows Jin Mingri, head pastor of the Zion church, posing in Beijing days after authorities shut down one of China's largest "underground" Protestant churches. Jin told The Washington Post in an interview, "The Communist Party has begun to see religion as a competitor. It’s not just [Protestant] Christianity, but also Catholicism, Buddhism, and Islam. They want all of us to pledge our loyalty to the party.” (Photo: Fred Dufour/ AFP/Getty Images)

Among the world’s 50 most dangerous countries for Christians listed in a new report are China and India, the two most populous countries.

Now in its 27th year, Christian advocacy organization Open Doors’ “World Watch List” is an annual survey of religious liberty conditions for Christians around the world, measuring the degree of freedom a person has to practice their religious beliefs.

In remarks Thursday at The Heritage Foundation, David Curry, the president and CEO of Open Doors USA, cited the rise of authoritarianism and nationalism in India and China as reasons for the unapologetic persecution of Christians. China moved up on the list from No. 43 to No. 27, and India placed at No. 10, cracking the list’s top 10 for the first time.

Installing the facial recognition technology reportedly aids the government in identifying certain groups of people that are banned from attending church service, such as educators, civil servants, college students, doctors, medical professionals, or individuals younger than 18.

Since Chinese President Xi Jinping has wielded state power to restrict Christianity, worship for unregistered churches has also become increasingly risky. Curry noted the arrest of Pastor Wang Yi along with around 150 Christians because he wouldn’t allow the Communist Party to change his church’s dogma.

“We believe everyone has the right to choose their own faith,” Curry asserted.

India has also pushed an agenda to aggressively purge Christianity, Curry remarked. Curry said Hindu nationalism has contributed immensely to religious persecution. Non-Hindus are outcasts in their own country. Many are victims of violence, especially Hindus who have converted into Christianity.

Curry urged CEOs of giant American corporations who are natives of these countries to speak out against such tragedies if they want to be part of the international business community.

Helene Fisher, a global gender persecution specialist, also spoke at the briefing and explained that religious persecution can be “gender specific.”

“Gender-specific persecution is an effective means of religious persecution. One of the major issues regarding female Christian persecution is forced marriage,” Fisher said. “Christian women are targeted because they raise children to become Christian.”