Liberals’ Real Problem Is That Christian Schools Exist at All 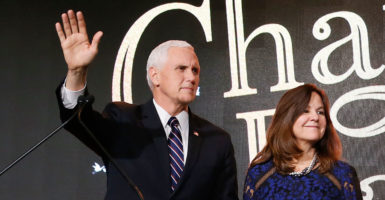 It was supposed to be a day celebrating religious freedom in America. Instead, liberals decided to show everyone just how much our First Freedom is at risk.

For Christians, who have tried to warn people that these past several years were about a lot more than marriage, the attacks on second lady Karen Pence certainly seem to prove their point.

Three years after Obergefell v. Hodges, all of the lies about “love” and “tolerance” have been eclipsed by the court cases, articles, and editorial demonizing people of faith.

What Americans see now is the truth: The left is coming for our freedom, and they have no intention of letting up.

Like former Vice President Joe Biden’s wife, Karen Pence spent years in the classroom. When Vice President Mike Pence was in Congress, she taught art at Immanuel Christian School in Virginia, and no one batted an eye.

Of course, that was back in the early 2000s, when the left’s charm offensive on same-sex marriage was still in full swing. We’ll be accommodating, they said. We just want to coexist, they said. Our relationships won’t affect you, they said.

A handful of years later, “affected” doesn’t begin to describe what happens to conservatives who think differently than the totalitarian left.

Of course, the Pences are not strangers to the other side’s viciousness. Every time the media is reminded about the family’s faith, they become hysterical all over again—a scene that played out this week when Karen announced she’d be volunteering at Immanuel Christian this spring.

“I am excited to be back in the classroom and doing what I love to do,” she said in a statement. “I have missed teaching art, and it’s great to return to the school where I taught art for 12 years.”

She can’t go back there, LGBT activists raged! They reject homosexuality! Yes, well, that’s what Orthodox Christian schools do. (Not to mention Jewish and Muslim ones, too.)

Would it have been headline news if Jill Biden taught at a Roman Catholic school? Probably not. Yet, the left and their media chums are hurling profanity at the Pences for something that, even five years ago, wouldn’t have been controversial.

CNN’s Kate Bennett was just one of the talking heads who doesn’t get it. “So, lemme get this straight,” she tweeted, “the second lady of the United States has chosen to work at a school that openly discriminates against LGBT adults and children?”

“So, lemme get this straight,” Ben Shapiro fired back. “You’re a reporter, but you’ve never heard of religious people before? ‘BREAKING: Pence’s wife is working for a Christian school that requires that Christian students pledge to abide by Christian standards of sin that have not changed in 2,000 years.’”

Since they do, the last thing liberals want is for anyone in public office to be associated with them. And despite what you’ve heard from the forces of intolerance, Immanuel Christian doesn’t “ban” anyone from the school.

What it does, Chad Greene points out, “is require a specific set of behavioral and religious belief standards equally applied to everyone.

“Many in the Christian world make a distinction regarding LGBT people that the left typically refuses to consider, between a person and his actions.”

Immanuel is in the business of teaching Christianity. What would be the point of a religious school if it didn’t?

This “immediate, visceral reaction” shows just how far the left will go to shame people of faith into silence. Worse, it proves the day they told us was coming is finally here. Back in 2015, during the Obergefell arguments, President Barack Obama’s top lawyer, Donald Verrilli, pulled back the curtain on the left’s real goal in one surprisingly candid moment.

We haven’t seen the left fully implement their plans, because they haven’t had the benefit of another radical president in the White House to build on the liberal legacy of Obama. But we don’t have to guess what they’ll do if they get one.

It’s all spelled out in the most recent Democratic National Platform. Religious freedom, as Americans have known it for 233 years, will not be safe in the hands of a movement that is surgically targeting people of faith.

When I talked to the vice president on “Washington Watch,” he didn’t mince words.

“Karen and I have been in and around public life for almost two decades, and so—to be honest—we’re used to the criticism, but the attacks on Christian education by the mainstream media have got to stop,” he said.

There used to be a consensus in this country that religious liberty was for everyone. When the Religious Freedom Restoration Act came before Congress, only three members voted against it. Over time, some liberals tried to isolate faith—to churches, Christian schools, or family rooms.

You’ve heard me say before that the left’s hope is to quarantine religion within the four walls of the church. Now, it’s becoming clear: Even that won’t satisfy them.

“I have always had a problem with the idea that religion is something we must keep to ourselves,” Matt Walsh writes in the Daily Wire. “Indeed, the Christian faith requires exactly the opposite. But in the case of Karen Pence and her new employer, they are doing exactly what the left demanded.

“It isn’t bothering anyone. It isn’t invading anyone’s home and lecturing them about their sexual behavior. It isn’t preventing anyone from working or living or enjoying their lives. It is just saying, very reasonably, very unobtrusively, ‘We are going to conduct ourselves according to Christian moral tradition. If you don’t want to accept that moral tradition, then by all means, go somewhere else.’

“This is exactly, precisely, the approach that the left for years endorsed and insisted upon. But suddenly it’s a problem. Suddenly, even Christianity behind closed doors, on private property, in a private school, is a target of outrage and scorn.

“It was a lie all along. They were never planning to stop outside the walls of our homes and our churches and our schools. That’s just what they said to lull us to sleep.

“Now the next phase begins.”