When Checks and Balances Fail 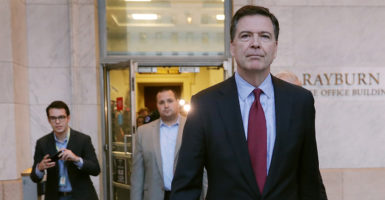 In February 2017, Dr. Christopher Duntsch became the first surgeon in American history known to be sentenced to prison for botching a patient surgery.

A licensed neurosurgeon, Duntsch left a string of deaths and maimed bodies in his wake: He was accused of causing the death of two surgery patients and leaving 33 others permanently damaged. His patients left their lives in his hands; he left them paralyzed or dead.

The checks and balances that were supposed to contain Duntsch failed utterly. His medical school licensed him but didn’t require the preparation necessary to instill competence. Hospitals suspended him but didn’t report him. The medical board could do nothing without forms filed against him. Patients were left without recourse.

When checks and balances fail, damage is usually the result.

That’s why when it came to our system of government, the Founders were so focused on creating gridlock. They recognized that in a system in which legitimacy sprang from popular support, the easy path to perdition lay in popularly backed centralized power—tyranny could spring just as easily from a popular majority as from a king or despot. The Founders didn’t trust individuals with authority, and they didn’t trust human beings to delegate authority to mere individuals.

But popular governments have always bucked against such limitations.

The majority of Americans always want action, on some grounds or others. That leads to an eternal drive to grant unchecked power to some institution of government. As Alexis de Tocqueville writes in his 1840 “Democracy in America”:

It may easily be foreseen that almost all the able and ambitious members of a democratic community will labor without ceasing to extend the powers of government, because they all hope at some time or other to wield those powers. … Centralization will be the natural government.

Trump’s allies seem eager for Trump to declare a national emergency in order to appropriate funds for a border wall. The law cuts against such a declaration: The National Emergencies Act was written to curtail presidential authority, not increase it. No matter how much border hawks (including me) want a border barrier, the proper method is to request funds from Congress.

Meanwhile, Trump’s enemies are celebrating reports this week that the FBI investigated Trump as a possible Russian agent after his firing of then-FBI Director James Comey. Trump had authority under the Constitution to fire Comey, and there’s no actual evidence that Trump is an agent of the Russians. But Trump’s enemies want the legislature to step in and attempt to protect the FBI from executive branch checks on it.

All of this is foolish.

Here’s the easy test: How would you feel if the situations were reversed?