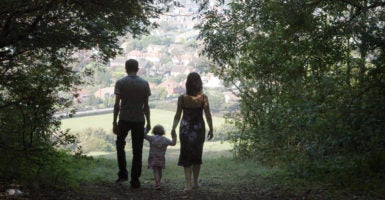 When a couple has a child, the woman’s earnings tend to decrease, while the man’s increases. This is known as the “motherhood penalty” and “fatherhood premium.”

Economists have pegged the resulting gap at about 20 percent of earnings over the long run, due to changes in labor force participation, hours of work, and wage rates.

Advocates of complete pay parity conjecture that gender-based discrimination is to blame for the gap in pay between mothers and fathers, suggesting that employers wrongly perceive women as less valuable once they become mothers and fathers as more valuable.

Fresh evidence from a study by Valentin Bolotnyy and Natalia Emanuel of Harvard University suggests the “motherhood penalty” and “fatherhood premium”—at least at the level experienced in this study—is the result of choices mothers and fathers make, and not gender-based discrimination.

The study, “Why Do Women Earn Less Than Men? Evidence from Bus and Train Operators,” examined the earnings and hours of male and female operators within the Massachusetts Bay Transportation Authority.

The unionized environment within the transportation authority prohibits gender-based discrimination. Even if a manager wanted to discriminate, they couldn’t, because pay and workers’ options depend exclusively on tenure.

Despite the rigid pay system, women made 11 cents less, 89 cents on the dollar, compared with men.

The authors concluded that the gap “can be explained entirely by the fact that, while having the same choice sets in the workplace, women and men make difference choices.”

As a whole, women chose to work only half as many overtime hours—80 hours per year, compared with 160 hours for men.

This is an important finding. Past studies have found a nonlinear gap in earnings within certain occupations based on flexibility and hours worked, particularly when it comes to highly paid occupations, such as law and medicine.

This study shows that flexibility and hours play a significant role for workers with average earnings and hours as well.

Moreover, the study found that some policy changes that reduced the earnings gap actually left women and men worse off.

The Massachusetts Bay Transportation Authority implemented two policies: one making it more difficult to take FMLA at a moment’s notice and another limiting workers’ ability to game overtime hours.

These changes reduced the earnings gap from 11 cents to 6 cents on the dollar, but at the price of reduced workplace flexibility and a significant reduction in earnings for both men and women.

As noted by the authors, “Because women have greater revealed preferences for this flexibility, women likely fared worse from these policies than men.” Instead of taking FMLA leave, women took more unexcused leave when their schedules did not meet their needs or desires, but unexcused leave can result in suspensions or termination.

The authors suggested that allowing workers to trade shifts could improve workplace flexibility without hurting performance.