Most Young Adults Disagree With Democrats on Abortion 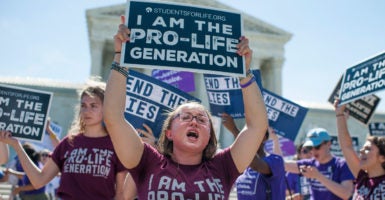 Protesters call for a vote on the NIFLA v. Becerra case outside of the Supreme Court on June 25, 2018. The case involves pro-life pregnancy centers and the requirement by California law to provide information on abortion. (Photo: Tom Williams/CQ Roll Call/Getty Images)

The Democrats’ national platform doesn’t just lack common decency when it comes to unborn life—it lacks common ground. For the last three years, the party of Barack Obama and Hillary Clinton has been fighting to do away with consensus limits on abortion—and based on the latest polling, that isn’t exactly endearing them to voters.

In 2016, the Democratic National Committee decided to take Democrats where no party had gone before. Clinton’s radical call to repeal the Hyde Amendment, the only thing standing between taxpayers and government-funded abortion, wasn’t just unpopular with Democratic leaders like Sen. Joe Manchin of West Virginia and Rep. Dan Lipinski of Illinois, but Americans, too. She went on to lose the election, and a lot of pundits—including The Washington Post’s—think her extreme social views were a big reason why.

The DNC didn’t listen to Americans then, but if it cares about the millennial vote, it may want to listen now. Most people—the media included—assume the under-34 crowd is in the left’s back pocket. But a new survey from Students for Life of America shows what a mistake that assumption has been.

On abortion, the DNC is turning out to be its own worst enemy. Not only are millennials one of the larger voting blocs in America, they’re also one of the most cautious when it comes to taking human life. In a poll that should scare the daylights out of the Democratic Party, only 7 percent of the 18-34 crowd agree with the DNC’s national platform on abortion—which is no legal limits and funded by taxpayer dollars.

Another 7 in 10 support restrictions on abortion, with 42 percent opposing abortion “broadly.” That’ll come as a shock to the Democrats’ system, which is betting most of its credibility on a surprisingly pro-life age group.

Kristan Hawkins, president of Students for Life, thinks this poll ought to be a wake-up call to any liberal taking the millennial vote for granted. Obviously, she said, “labels like pro-life, pro-choice, access, health, or women’s rights often camouflage the true realities of the policies that today crisscross the country.” Just because some young people call themselves “pro-choice” doesn’t mean they’re anti-regulation.

That’s especially bad news for liberals, who’ve spent the better part of a decade fighting commonsense restrictions on abortion. Now, caught in an incredibly shrinking tent, Democrats might be forced to reconsider their opposition to things like parental notification or the pain-capable abortion ban. Of course, that much has been clear for a while.

According to the Marist poll, people of every age think abortion does more harm than good. “Seventy-four percent of Americans—including 54 percent who identify as ‘pro-choice’—are in favor of ‘significant restrictions’ on abortion.” And that crosses every racial, gender, and political line.

Young people also had a surprisingly unfavorable view of Planned Parenthood. “By about a 3 to 1 margin (48 percent to 17 percent), millennials said they preferred that their tax monies went to Federally Qualified Health Centers rather than the abortion giant, Planned Parenthood.”

Democrats are losing their grip on this demographic—and soon. If there is a future for the party, one thing’s for sure: they’d better rethink their abortion platform.