Memo to Liberals: Higher Taxes Have Already Been Tried 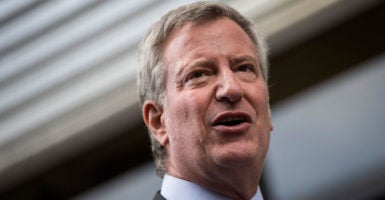 When you receive your paycheck and look at the withholding for federal, state, and sometimes city taxes, along with Social Security and Medicare, you probably don’t think you’re underpaying governments and want them to take more.

New York City Mayor Bill de Blasio believes that if you have played by what used to be called “the rules” and are making a decent living, taking care of yourself and your family, and not relying on government, your taxes should be increased.

He blamed presidential administrations from Reagan to Trump.

The mayor ignores the tax cuts and in some cases spending reductions that have fueled an economic boom, producing more wealth for individuals and more revenue for governments.

The mayor is not alone in promoting unvarnished liberalism, which the many on the left have tried to mask behind the “progressive” euphemism.

Rep. Alexandria Ocasio-Cortez, D-N.Y., suggests we institute a 70 percent tax rate on the wealthy. Julian Castro, the former mayor of San Antonio and Department of Housing and Urban Development secretary, who just announced he is running for president, has resurrected the “fair share” lingo of past Democrats. In an interview with ABC News, Castro seemed nostalgic for a time when the top marginal tax rate was 90 percent.

Sen. Elizabeth Warren, D-Mass., who has formed a presidential exploratory committee, hasn’t said what top tax rate she favors, but she told CNBC last July that “90 percent sounds pretty shockingly high.” Why, because it would stifle incentive? What about 80 percent? Why not confiscate all private-sector money and let the government decide how much each of us should be allowed to have? Wouldn’t pure socialism be a dream come true for the far left?

It’s not that higher taxes and more government spending hasn’t been tried. Lyndon Johnson’s Great Society, a series of U.S. programs charged with totally eliminating poverty and racial injustice in the country, is but one example. Johnson failed to achieve his goal of wiping out poverty because his social programs began in Washington, not in individual hearts and minds.

Until the mid-20th century, Sweden pursued highly competitive market-based policies. By 1970 Sweden achieved the world’s fourth-highest per capita income. Then increasingly radical Social Democratic governments raised taxes, spending and regulation much more than any other Western European country. Economic performance sputtered. By the early 1990s, Sweden’s per capita income ranking had dropped to 14th. Economic growth from 1970 to the early 1990s was roughly 1 percentage point lower than in Europe and 2 points lower than in the U.S.

In 1991, they write, a market-oriented government assumed power and instituted major reforms. As a result, the country is now “richer than all of the major EU countries and is within 15 percent of U.S. per capita GDP. While Sweden still has a larger government than the U.S., its tax code is flatter. The progressivity of the U.S. tax code distorts incentives.”

Sweden’s experience with socialism has a lesson for Americans and especially millennials, a majority of whom favor socialism over capitalism, according to a 2016 Harvard University survey. Maybe they should take a closer look at their pay stubs and ask themselves whether they would be OK with handing over more of their net pay to federal, state, and local governments that irresponsibly and unnecessarily spend their money on programs that don’t work.