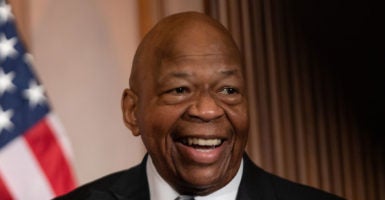 Rep. Elijah Cummings, D-Md., said Republicans have been working together to protect the president, and that he plans to “look at anything” to get answers. (Photo: NurPhoto/Getty Images)

The new chairman of the House Oversight and Government Reform Committee says he will do all he can to investigate President Donald Trump and his administration over the next two years.

“We are in a fight for the soul of our democracy,” Rep. Elijah Cummings, D-Md., said in an interview with CBS’ “60 Minutes” that aired on Jan. 13. “And you’ve got to understand that. This is serious business.”

Cummings said that, as chairman of the committee, he has the authority to investigate anything he deems appropriate to examine.

“We can look at anything,” Cummings said, concurring with “60 Minutes” correspondent Steve Kroft’s suggestion that the Department of the Interior and the Environmental Protection Agency, for example, are fair game for investigation.

Ryan Zinke resigned Dec. 15 as secretary of the Interior Department and left office Jan. 2, over “multiple probes tied to his real estate dealings in Montana and conduct while in office,” according to the Chicago Tribune.  “Scott Pruitt, former administrator of the Environmental Protection Agency, resigned in July due to what he characterized as “unrelenting attacks” on him and his family, which “have taken a sizable toll on all of us,” Pruitt said, per CNN.”

The Maryland lawmaker, who has sat on the oversight committee under four presidents, says he thinks Trump is making a profit from his business dealings, even though Trump reportedly resigned from “each and every office and position” he held, according to a January 2017 letter provided to CNN by the Trump Organization.

Cummings said he thinks Trump is making “a lot of money,” and says the American people should know if that’s the case.

“It’s not OK,” the Baltimore Democrat said. “And, but this is the other piece. I still believe that people—the average citizen, the guys on my block—they ought to know if the president is making a deal, whether he’s making it, making it in his self-interest or that of the country.”

CBS reported that Cummings has already made “64 requests for subpoenas on things like White House security clearances, hurricane relief efforts in Puerto Rico, and the Justice Department’s refusal to defend the Affordable Care Act,” which were subsequently stopped by the Republican chairman of the committee in the previous Congress.

Cummings said Republicans have been working together to protect Trump, and that he plans to “look at anything” to get answers.