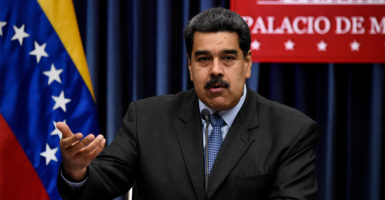 Government corruption hands Venezuelan President Nicolas Maduro a second term while the United Nations projects the number of Venezuelan refugees will increase to 5.3 million by the end of next year. (Photo: Federico Parra/AFP/Getty Images)

On Thursday, Nicolas Maduro will be sworn in for his second term as Venezuela’s president, but the election was anything but free and fair. Opposition politicians were imprisoned and/or barred from running. Meanwhile, his socialist party cronies controlled the entire electoral system.

Far from democracy, this is a criminal syndicate of government kleptocrats in action. And 20 years of their corrupt mismanagement has left the nation with the world’s biggest known oil reserves experiencing Latin America’s worst humanitarian crisis.

Oil is the backbone of the Venezuelan economy, bringing in nearly 98 percent of its export revenues. But those revenues have tanked because of corruption and mismanagement within the state-run industry. In 2012, Venezuela earned $106.7 billion from oil; last year, that number slumped to $20.9 billion.

More than 3 million Venezuelans, including half the nation’s doctors, have abandoned the country. It’s a staggering number, far exceeding the number of North Africans and the Middle Easterners who have sought refuge in Germany, France, and Sweden combined.

Most of those fleeing Venezuela have resettled elsewhere in Latin America, with Colombia bearing the brunt of the burden, receiving over 1.6 million Venezuelan migrants since 2015.

On a trip to Bogota last year, I met with Colombian government officials who painted a stark picture. They think that, on average, nearly 50,000 Venezuelans cross into Colombia daily. Not all stay; some make the journey simply to purchase goods unavailable back home.

But many are relying on the generosity of Colombia and international aid groups. The United Nations believes that, by the end of next year, the number of Venezuelan refugees will total 5.3 million.

Many of those fleeing the Maduro regime are destitute. But his inner circle has profited handsomely by plundering their country’s wealth and using their government positions for illegal activity.

Their network of corruption extends across the hemisphere, even into the U.S. When the U.S. Department of Treasury designated then-Vice President Tareck El Aissami as a narcotics trafficker, U.S. law enforcement was able to seize an estimated $500 million in narcotics-related assets like multimillion-dollar properties and a Gulfstream jet. (El Aissami is now minister of industries and national production.)

He is not the only Venezuelan official linked to narcotics trafficking. The first lady’s nephews are currently serving 18-year sentences in the U.S. for attempting to sell drugs to an undercover Drug Enforcement Administration agent.

In 2008, Hugo Carvajal was also labeled a drug trafficker by the U.S. government. At the time, he was the director of Venezuela’s Military Intelligence Directorate. According to the Treasury Department, he protected drug shipments and provided weapons to the Revolutionary Armed Forces of Colombia, or FARC, a Marxist Colombian terrorist group. He also provided Venezuelan government identification to Revolutionary Armed Forces of Colombia combatants.

The government’s support of regional and international terrorist groups is well documented. Venezuela’s former minister of interior and justice is accused of being the Revolutionary Armed Forces of Colombia’s primary contact within the government, reportedly even trying to secure a $250 million Venezuelan government loan. In 2008, the U.S. accused Venezuela’s chief diplomat in Syria of fundraising and providing travel support to Hezbollah operatives.

The U.S. Treasury Department Office of Foreign Assets Control has more than 100 of Maduro’s associates designated for drug trafficking, dozens of them current or former high-ranking government officials. The U.S. equivalent of these officials would be the heads of Homeland Security, FBI, and CIA. There are even six entities connected to Iranian financial and terrorist organizations.

Nearly 50 countries have challenged the results of Venezuela’s 2018 elections, but those challenges are blithely ignored by the regime. More is needed. The diplomatic rebukes should be followed by action.

Targeted sanctions, downgrading of diplomatic relations, and stronger efforts at targeting illicit government financial networks are commonsense policies other countries besides the U.S. should adopt. Undoing 20 years of damage must begin today.