The Frustrating Flip-Flopping of Politicians Over the Border Wall 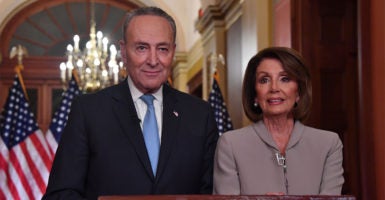 Despite advance billing that President Donald Trump’s border wall speech would break news and contain new information, it was mostly familiar rhetoric: Criminals and drugs, rapists and murderers are coming to America and the wall is the only way to stop them.

The president named families who have lost loved ones at the hands of illegal immigrants. A case could be made, though, that American citizens are killing each other at higher rates during an average weekend in Chicago and other big cities than are killed by immigrants.

Whose facts to believe? There are plenty on both sides of the argument.

Raul Ortiz, the deputy chief of Border Patrol agents, says his agents are arresting up to 641 illegal immigrants every day. Other sources say arrests and border crossings have substantially declined in recent years.

What frustrates average Americans is the flip-flopping by politicians who were for a border wall and holding people who broke our laws accountable before they were against it.

These include Hillary Clinton, Barack Obama, and Chuck Schumer, all of whom once championed stronger border security. When he was a senator from Illinois in 2006, Obama said:

Those who enter our country illegally and those who employ them disrespect the rule of law. And because we live in an age where terrorists are challenging our borders, we simply cannot allow people to pour into the United States undetected, undocumented, and unchecked. Americans are right to demand better border security and better enforcement of our immigration laws.

Those remarks are in line with what Trump is now saying.

The president tweeted a comment Clinton made as recently as 2015 to underscore his claim of hypocrisy by Democrats: “I voted, when I was a senator, to build a barrier to try to prevent illegal immigrants from coming in.”

The major media and their Democrat allies claim that the decline in the number of people crossing the southern border is proof that a wall or other barrier is not needed. But a case could be made—and the White House made it in a statement—that walls already in place are proof that barriers work.

Yes, many went to other places where they could cross more easily, but that’s an argument for expanding the wall or constructing other barriers.

Schumer and House Speaker Nancy Pelosi challenged the president in a sleight-of-hand deal to re-open the part of government that is closed and then continue the debate about a wall. That reminds me of the “deal” offered to President George H.W. Bush by then-Speaker Jim Wright, D-Texas. Wright said Congress would cut spending if Bush would OK a tax increase. Bush was blamed for the tax hike, never got the spending cuts, and lost his re-election bid.

In the end it is going to be a battle of images. One image is of people trying to cross the border illegally, throwing rocks, a few engaging in criminal activity; the other image is of 800,000 suffering federal employees going without paychecks.

Which side will win is less important than what is best for America. If only more politicians cared about that higher goal.