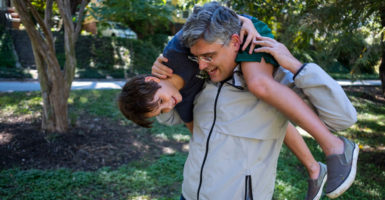 "Giving men purpose requires us to give them purpose as men, not merely as genderless beings," writes Ben Shapiro. (Photo: The Washington Post/Getty Images)

This week, the American Psychological Association proved once again that it is a political body rather than a scientific one.

This isn’t the first time a major mental health organization has favored politics over science—in 2013, the American Psychiatric Association famously reclassified “gender identity disorder” in the Diagnostic and Statistical Manual of Mental Disorders, calling it “gender dysphoria” and then explaining that living with the delusion that you are a member of the opposite sex is not actually a mental disorder at all.

That ruling was based on zero scientific evidence—much like the original DSM-5 classification of pedophilia as a “sexual orientation” before it was renamed “pedophilic disorder” under public pressure.

The latest example of the American Psychological Association’s political hackery concerns the topic of “traditional masculinity.”

In the American Psychological Association journal, it announced that it had released new guidelines to “help psychologists work with men and boys.” Those guidelines suggest that “40 years of research” show that “traditional masculinity is psychologically harmful and that socializing boys to suppress their emotions causes damage that echoes both inwardly and outwardly.”

The American Psychological Association explains that “traditional masculinity—marked by stoicism, competitiveness, dominance, and aggression—is, on the whole, harmful. Men socialized in this way are less likely to engage in healthy behaviors.”

Traditional masculinity is actually just men sitting around and eating burgers while grunting at one another about football, all the while crying on the inside because they have been prohibited by society from showing their feelings.

And it’s worse than that.

According to the American Psychological Association, traditional masculinity bumps up “against issues of race, class, and sexuality,” maximizing both interior and exterior conflict.

Dr. Ryon McDermott, a psychologist from the University of South Alabama who helped draft the new American Psychological Association guidelines, suggested that gender is “no longer just this male-female binary.” Rather, gender is a mere social construct that can be destroyed without consequence.

Here’s the American Psychological Association making the extraordinarily dishonest statement that gender differences aren’t biological at all, in contravention of all known social science research: “Indeed, when researchers strip away stereotypes and expectations, there isn’t much difference in the basic behaviors of men and women.”

All of this is not only nonsense; it’s wildly counterproductive nonsense.

Buried beneath the reams of nonsense in the American Psychological Association report is this rather telling gem: “It’s also important to encourage pro-social aspects of masculinity. … In certain circumstances, traits like stoicism and self-sacrifice can be absolutely crucial.”

But we must never suggest that such traits ought to be included as part of a “traditional masculinity,” because that would make some people feel excluded.

Here’s the truth: Men are looking for meaning in a world that tells them they are perpetuators of discrimination and rape culture; that they are beneficiaries of an overarching, nasty patriarchy; that they are, at best, disposable partners to women, rather than protectors of them. Giving men purpose requires us to give them purpose as men, not merely as genderless beings.

There’s a lot to be said for the idea that our culture has ignored the necessity for men to become gentlemen. But that’s a result of a left-wing culture that denigrates men, not a traditional masculinity built on the idea that men were born to defend, protect, and build.

One thing is certainly true, though: The American Psychological Association has destroyed itself on the shoals of politics. And there’s no reason for honest-thinking people to take its anti-scientific pronouncements seriously simply because it masquerades as scientists while ignoring facts in favor of political correctness.