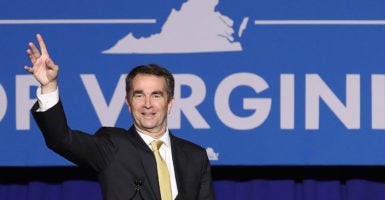 “Participation makes our democracy strong—we should encourage every eligible voter to exercise this fundamental right, rather than creating unnecessary barriers that make getting to the ballot box difficult,” Northam, a Democrat, said in a statement.

Delegate Kaye Kory, a sponsor of the measure, said in a statement, “The photo ID requirement prevents the most vulnerable Virginians from voting and silences the voices of those who most need to be heard.”

The proposal would also allow people to vote absentee without providing a reason why they could not make it to the polls.

Democrat Terry McAuliffe beat Republican Ken Cuccinelli for the Virginia governorship in 2013 by only 56,000 votes. In 2014, Democrat Mark Warner squeaked by against Republican Ed Gillespie in a Senate race decided by less than a percentage point, or 18,000 votes. The attorney general’s race came down to a mere 165 votes.

Then, just before the 2016 election, McAuliffe restored the right to vote for 60,000 felons using an unorthodox procedure.

McAuliffe had sought to allow all of Virginia’s estimated 200,000 felons to vote, but state courts said each individual felon’s circumstances must be weighed. To get around that, McAuliffe used a mechanical autopen to rapidly sign at least 60,000 letters as if he had personally reviewed them each.

In the next race for governor in 2017, Northam beat Gillespie decisively by 9 percentage points, or 233,000 votes. In the 2016 presidential election, Clinton beat Donald Trump in Virginia 49.7 percent to 44.4 percent.

In the November 2018 elections, Florida voters passed a ballot measure that restored voting rights to the state’s 1.5 million felons.

Florida’s political parties have historically been so evenly matched that multiple statewide races went to recounts in 2018. Florida has a large number of Electoral College votes, and in 2000, the U.S. presidency infamously hung in the balance as Florida conducted a contentious recount.

“California just defies logic to me,” then-House Speaker Paul Ryan, a Wisconsin Republican, said. “We were only down 26 seats the night of the election, and three weeks later, we lost basically every California contested race.”

Ballot harvesting allows groups to send people knocking on doors and eliciting absentee ballots from them, which the groups then collect and submit.

One ballot harvester was recorded saying it’s a “new service” for “like, people who are supporting the Democratic Party.”

Before its passage, a group opposed to the bill wrote that the law enabling ballot harvesting “would allow anybody to walk into an elections office and hand over truckloads of vote by mail envelopes with ballots inside, no questions asked, no verified records kept. It amounts to an open invitation to large-scale vote buying, voter coercion, ‘granny farming,’ and automated forgery.”