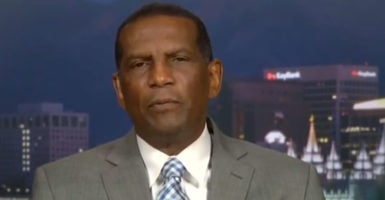 “The biggest takeaway from the last two years—we are in the fight for the heart and soul of our nation,” says the former NFL player. (Photo: "Fox & Friends" screenshot)

Owens was discussing the NFL’s ratings boost as national anthem protests begin to fade and said America is fighting for its soul.

“The biggest takeaway from the last two years—we are in the fight for the heart and soul of our nation,” Owens said Friday on “Fox & Friends.”

“We are fighting for our American, Judeo-Christian values and we’re fighting against a very evil force of socialism and Marxism that destroy everything they come close to. The NFL has been changed forever and people don’t realize this. But it used to be a place where we come together, no matter what our political persuasion was, and there was unity because we had God, country, and family.”

“The Marxists and socialists made that so that we have these young people coming out of these environments—they’re anti-American, they’re anti-white, they’re anti-capitalist—and that is the message that now is going around the world and throughout our communities—that this is a place that’s not for black Americans,” he added.

Owens claimed the far-left ideology is “evil” and seeks to destroy people’s “belief in God.”

“You look at the American black community, which once led our country, believe it or not, in the commitment to marriage and commitment to education, to entrepreneurship when I was growing up—that has turned totally upside-down because we have these black elitists, particularly, the ones you just mentioned that care less about our community. They care about their profits, their profitability, and their prestige. And that’s what elitists do. That’s what socialists do.”

“I’ve watched as I’ve grown up, the impact of these socialists. Our greatest enemy is not white supremacists—it’s black elitists,” Owens argued. “Those who live the American dream, who get a job for $100,000 a year as politicians and come out as multimillionaires, because what they do is they betray their own base. The people that believe in them, they give them up so they can get their ideology in place.”