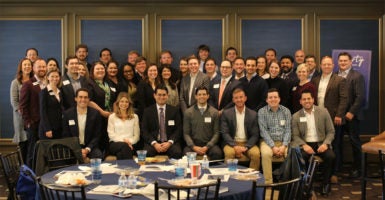 A Texas nonprofit whose missions is to “promote and defend liberty, personal responsibility, and free enterprise” in the state and nation held a two-day public policy conference in November to train young conservatives to be effective leaders in their communities.

The Liberty Leadership Council, a project of the Austin-based conservative think tank Texas Public Policy Foundation, convened more than 60 young people under the age of 40 to learn about the inner-workings of the Texas Legislature and how to advocate for conservative ideas in their circles of influence on Nov. 15-16.

The council has five chapters in the state’s major cities: Austin, Houston, Dallas, Fort-Worth, and Midland.

Jennifer Carter, the director of the Liberty Leadership Council, said she hoped attendees left the summit empowered to initiate change in their own neighborhoods.

“We really hope that after they hear the program and after we give them the breakdown of how the government works… they will feel empowered to engage with their peers and elected officials to effect change,” Carter told The Daily Signal.

On the first day of the event, participants went on a tour of the Texas Capitol, followed by a dinner featuring Texas Public Policy Foundation Director Kevin Roberts and a networking reception for “like-minded conservative people.”

Attendees also heard from state Rep.-elect Mayes Middleton, R-Galveston, a young Texas businessman who also serves on the board of Texas Public Policy Foundation. Middleton, Carter said, played an instrumental role in setting up the Houston Liberty Leadership Council, and shared his experience in his speech to attendees.

Summit-goers also heard testimonials from other activists in the state who have benefited from the Liberty Leadership Council.