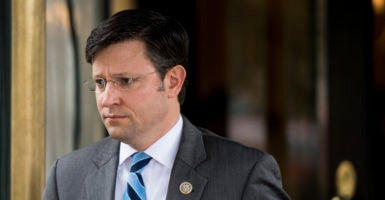 “It will be the counterweight to what [Nancy] Pelosi and the Democrats are going to do," Rep. Mike Johnson, R-La., says of the Republican Study Committee. Pictured: Johnson leaves the Capitol Hill Club on May 16, 2018. (Photo: Bill Clark/CQ Roll Call/Newscom)

The new leader of House Republicans’ largest caucus says he plans to “streamline” its operations to effectively counter the Democrats as they take control of the lower chamber of Congress.

For starters, the Republican Study Committee no longer will have a dozen or so task forces, Rep. Mike Johnson, R-La., said in a recent phone interview with The Daily Signal as the group’s incoming chairman.

“We’re going to streamline that into seven core working groups,” Johnson said of the RSC, a caucus of about 178 GOP lawmakers.

After their midterm election victories, Democrats now have 235 seats in the House, compared with Republicans’ 199. Nancy Pelosi, D-Calif., again became speaker of the House after the 116th Congress convened Thursday.

Johnson, 46, said he sees an opportunity for the Republican Study Committee to build its presence and influence.

“We’re also at the same time going to be working on our messaging strategy because we feel like it’s going to be vitally important, as we move into the minority position in the Congress, to articulate what our conservative ideals and answers are,” Johnson said.

“It will be the counterweight to what Pelosi and the Democrats are going to do,” he said.

The Louisiana lawmaker said his goal is to unite RSC members so they can continue making headway on issues that matter most.

“We’ve got so many talented people in our caucus and all of them bring so much to the cause and to the movement,” he said. “And we want to give more and more opportunities for our rank and file members to be a part of that, developing the mission and defining what the conservative movement looks like for the next decade or more.”

Johnson, who assumed office in 2017, said each RSC task force will have specific objectives and goals, and that their leaders will be chosen based on expertise and interests.

Although Johnson wasn’t ready to announce the new task forces, he said people can expect the caucus to stay true to key priorities such as its budget and spending task force, which produces an annual budget proposal.

The RSC will have a “vibrant” task force on health care and related entitlements and will continue to have a task force on foreign affairs and national security, Johnson said.

He also indicated that the Values Action Team, which works with outside groups and focuses on traditional family values such as religious freedom and the sanctity of life, will continue to be “another one that RCS is really well known for.”

Johnson, who received his law degree in 1998 from Louisiana State University, was a litigator for almost 20 years. He worked on what his official bio calls “high profile constitutional law cases in district and appellate courts nationwide.”

Johnson said he was hired as one of the earliest lawyers at Alliance Defending Freedom, a legal defense organization launched in 1994 that works to safeguard religious freedom, the sanctity of life, and marriage and family. He said his work there helped shape who he is as a person.

“That sort of started my journey in all this and it became primarily a religious liberty defense litigator,” Johnson said.

When he would attend a meeting of the Values Action Team, he said, he’d look around the table and see “20 or 25, 30 different organizations” represented, and “at some point in my career, I represented almost everybody in that room once.”

He didn’t want his children to grow up in the Capital Beltway area, he said, and so opted to stay in Bossier Parish in northwestern Louisiana, and travel back and forth rather than relocate.

“We didn’t want to raise our kids in the Beltway, so we’ve been pretty insistent about that. So far it’s worked out,” Johnson said. “So yeah, I travel. I go back and forth constantly, so it’s a sacrifice on everybody’s part. But we’re blessed because … we have really great kids and they’re all into this.”

His children are relatively young, but Johnson said he is inspired by their expressed interest in his career.

“It’s so bad that three out of four of my children say they want to be constitutional law attorneys when they grow up, so we’ll see how far that gets,” he said.