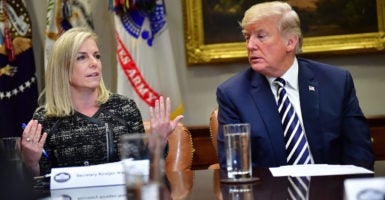 After years of catch and release, loopholes, and poor enforcement, the Department of Homeland Security is moving to plug the holes in the U.S. immigration system, and especially the loopholes that surround the asylum system.

One of the most serious problems the U.S. faces in its immigration system is that when illegal immigrants cross the border, they can claim asylum in order to avoid quick deportation. This is an especially common tactic with illegal immigrants from El Salvador, Guatemala, and Honduras.

Less than 10 percent of these individuals, however, will end up qualifying for asylum.

But asylum often isn’t the real objective: Those who manage to pass through the initial screening are often released into the U.S. This is made worse by various loopholes such as the Flores settlement and the Trafficking Victims Protection Reauthorization Act, which require unaccompanied children and adults with children to be released.

The result is that many “asylum seekers” will simply disappear, many not even bothering to apply for asylum after being released.

So, the administration searched its existing legal authority for ways to stop this phenomenon and found a provision of the Immigration and Nationality Act that allows the government to return aliens to Mexico while they await their immigration court hearing.

By ending catch and release and replacing it with “catch and return,” Homeland Security is ending one of the major incentives driving illegal immigration.

As the administration pursues this protocol, Mexico has said it will provide humanitarian visas, work authorizations, and other protections to those waiting in Mexico. This partnership with Mexico is a critical piece of the solution and one that the Trump administration should be commended for reaching.

This action also closely follows the recommendations of Heritage Foundation analysts for fixing the broken immigration system. Heritage research has recommended that Congress adjust the asylum process to move asylum processing to consulates in Mexico. This way, the U.S. does not have to detain asylum-seekers and none are released into the U.S. until they have proven their asylum claims are valid.

And on this note, Congress still should close these loopholes and fix the asylum system. This order will likely be challenged in the courts, and the only sure way to lastingly reform our broken asylum system is with legislation. Congress must do its job if the U.S. is ever going to really fix the problems in its immigration system.

In the meantime, the new asylum policy is welcome news.