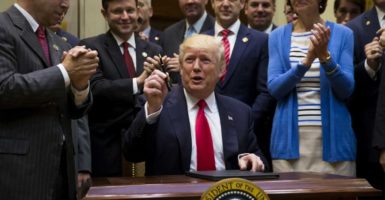 President Donald Trump signs an executive order on energy in the Roosevelt Room at the White House. (Photo: Eric Thayer/UPI/Newscom)

President Donald Trump has pushed his administration toward “energy dominance” by cutting environmental regulations on fossil fuel development and opening up federal lands and waters for energy companies.

The Trump administration has dealt significant blows to the environmental legacy of former President Barack Obama, tackling Obama-era regulations, such as the Clean Power Plan, while taking the U.S. out of the Paris climate accord, an international agreement to cut emissions and combat climate change that the Obama administration signed the U.S. onto in 2015 and pushed heavily in its final months.

Opened Up Massive Oil and Gas Reserves in Alaska

The Department of the Interior put forward a proposal on Dec. 20 to allow oil and gas drilling in Alaska’s Arctic National Wildlife Preserve (ANWR). The proposal would open up ANWR’s coastal plain, known as the 1002 Area, to oil and gas development and settle an issue Congress and environmentalists have fought over for decades.

Trump and Republicans in Congress opened up ANWR’s 1002 Area to drilling in an amendment tacked on the tax bill passed in December 2017. The Trump administration announced in April it would review an application to drill in the 1002 Area, a necessary first step to tapping into the region’s natural resources.

The 1002 Area covers 1.5 million acres of ANWR’s 19 million acres in northern Alaska. The reserve was designated by former President Jimmy Carter, but the coastal plain was carved out for potential future development. ANWR contains an estimated 10.4 billion barrels of recoverable oil, according to a 1998 assessment by the U.S. Geological Survey.

Alaska’s congressional delegation has fought for more oil and gas drilling in the state for decades, but environmentalists and Democrats in Congress have largely opposed such legislation.

Obama meant for the Clean Power Plan to bring the U.S. energy sector in line with the goals of the Paris climate accord, though the rule itself would have had little effect on climate change. Trump undercut the need for the strict regulation when he announced in June 2017 that the U.S. would leave the international climate change agreement.

US Became the World’s Largest Oil and Gas Producer

The United States overtook Saudi Arabia and Russia in September to become the world’s largest oil producer. U.S. production of oil roughly doubled over eight years from 2010 to 2018 due to an oil boom brought on by a more efficient process known as hydraulic fracturing.

The oil boom predates the Trump administration but was largely due to oil production on state and private lands. Trump’s “energy dominance” agenda has focused on stripping away strict environmental regulations and cutting down drilling permit approval times to encourage the oil boom to expand on federal land as well.

The Trump administration repealed an Obama-era regulation in September costing oil and gas companies hundreds of millions of dollars to develop on federal land. The Methane and Waste Prevention Rule, enacted in 2016, was meant to curb methane emissions on federal land.

Environmentalists supported the rule to tamp down release of the potent greenhouse gas into the atmosphere and combat climate change. The regulation was a severe drag on oil and gas companies, and repealing the measure is expected to save the energy industry roughly $1 billion over the next decade.

The U.S. currently leads developed countries in cutting back emissions despite every other country supporting a global commitment to combat climate change, the Paris climate accord. Methane emissions in particular have dropped in the U.S. since 2011. Emissions from onshore natural gas production fell nearly 14 million metric tons between 2011 and 2016 while natural gas production continued to rise, according to a December 2017 report by Energy In Depth.

The Trump administration more than doubled the record for most money made in a single oil and gas lease sale. The sale, which covered 142 parcels in New Mexico in September, grossed nearly $1 billion, shattering the record and bringing in more revenue than every lease sale in 2017 combined. Half of the revenue from the sale went to the state of New Mexico.

Several months after the record-setting lease sale, the Department of the Interior discovered the largest oil and gas reserve ever found in the U.S. The Delaware Basin, which lies beneath parts of New Mexico and Texas, holds an estimated 46.3 billion barrels of unrecovered oil and 281 trillion cubic feet of natural gas.

Trump proposed in January revising a five-year offshore drilling plan designed under the Obama administration. The revised program would open nearly all federal water to potential offshore oil and gas development, a near complete reversal of the Obama policy.

The Trump administration is expected to come out with a final plan in 2019 revising the 2017-2022 Outer Continental Shelf Program designed under Obama. Meanwhile, DOI has continued to schedule and hold offshore lease sales under the Obama-era plan

The DOI announced in September an offshore oil and gas lease sale to take place in March 2019 that would include 78 million acres in the Gulf of Mexico.