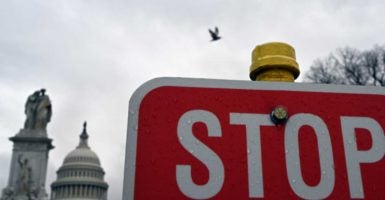 Had the president not issued this executive order (and lacking congressional action on federal pay), federal workers would have received a 2.1 percent across-the-board pay increase, as well as a 25 percent increase in locality-based pay.

That exceptional pay spike would have kicked in had the president not acted and had the default changes specified in the 1990 Federal Employees Pay Comparability Act kicked in instead. That act provides for annual federal pay increases based on the Bureau of Labor Statistics’ Employment Cost Index, which tracks civilian employment costs.

Despite the specified formulaic federal pay increases, federal pay has more recently been set by presidents through their authority to propose an alternative pay schedule.

As has become the norm in recent decades, presidents typically set their own pay proposal by Aug. 31 and barring alternative congressional action on federal pay before Dec. 31, the president’s proposal goes into effect.

In his first year in office, Trump specified a 1.9 percent federal pay increase for 2018, including a 1.4 percent across-the-board increase and 0.5 percent distributed to locality-based pay.

During the Obama administration, federal employees had three consecutive years of pay freezes from 2011 to 2013, with average increases of 1.5 percent in the other five years.

Thus far in 2018, the Senate enacted a 1.9 percent federal pay increase as part of its budget, but the House failed to address federal pay, effectively endorsing the president’s proposed pay freeze.

Congress could still pass a budget including a federal pay adjustment in the last remaining days of 2018, but given the partial government shutdown, it seems unlikely that federal pay will become a priority.

A retroactive pay increase would be possible—that happened in 2003 and 2004 under the George W. Bush administration when Congress similarly hadn’t passed funding bills by the end of the year.

It seems less likely in 2019, however, that Congress would enact and the president would sign a retroactive federal pay increase given the administration’s clear directive for a freeze.

Federal pay should depend on workers’ skills, experience, and performance—not just their years of service and across-the-board annual pay increases.

Ideally, Congress should address federal employee pay and compensation through a broad reform package—addressing not only federal pay, but total compensation also including retirement, health, vacation, and other benefits—that would better align federal compensation with that of the private sector and better tie pay to performance.

Absent significant congressional action to improve the efficiency and effectiveness of federal compensation, the president’s pay freeze makes sense, both as a way to close the growing gap between federal and private sector compensation, as well as to reduce excessive government spending.

Congress would be wise, however, to grant the president his proposed $1 billion interagency workforce fund as a replacement for across-the-board pay raises.

The proposed fund would serve as a way to inject some measure of performance-based pay into the federal system, and to reward and retain the most highly-skilled and highly-performing federal workers.