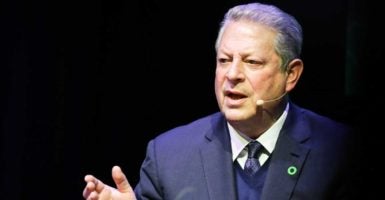 KATOWICE, Poland—TV weather forecasters who understand the potential dangers of climate change are well-positioned to educate the public and spur them to take action, participants said in a panel discussion at the 24th Conference of the Parties to the United Nations Framework Convention on Climate Change held here earlier this month.

A major theme at the conference—widely known as COP24—was that severe remedial measures are needed to mitigate rising levels of carbon dioxide emissions before severe weather conditions can take hold.

The meeting, which ran from Dec. 2 to Dec. 14, took its inspiration from the U.N.’s Intergovernmental Panel on Climate Change, or IPCC, which released a new report in October that concluded limiting global warming to 1.5 degrees Celsius—rather than 2 degrees Celsius—between now and 2030 would be beneficial to human populations and ecosystems.

But the report’s Summary for Policymakers also said that “rapid,” “far-reaching,” and “unprecedented” changes would be needed across society to achieve this reduction in the rate of increase in temperature.

Enter Climate Without Borders, an organization founded in 2017, which brings together about 140 weather presenters (as the forecasters are commonly referred to outside the U.S.) from 110 countries.

Jill Peeters, a Belgian weather presenter, started the group when she placed all her weather contacts into a WhatsApp group. From there, it grew into an organization devoted to sounding the alarm about extreme weather and climate change.

Peeters, who took part in the panel discussion on Dec. 4, told her audience that science is on the side of weather presenters who are willing to engage the public about emerging dangers associated with climate change that’s already in motion.

“TV weather presenters are seen as a trusted source,” she said. “We are backed up by science, and this is the basis of our communications.” 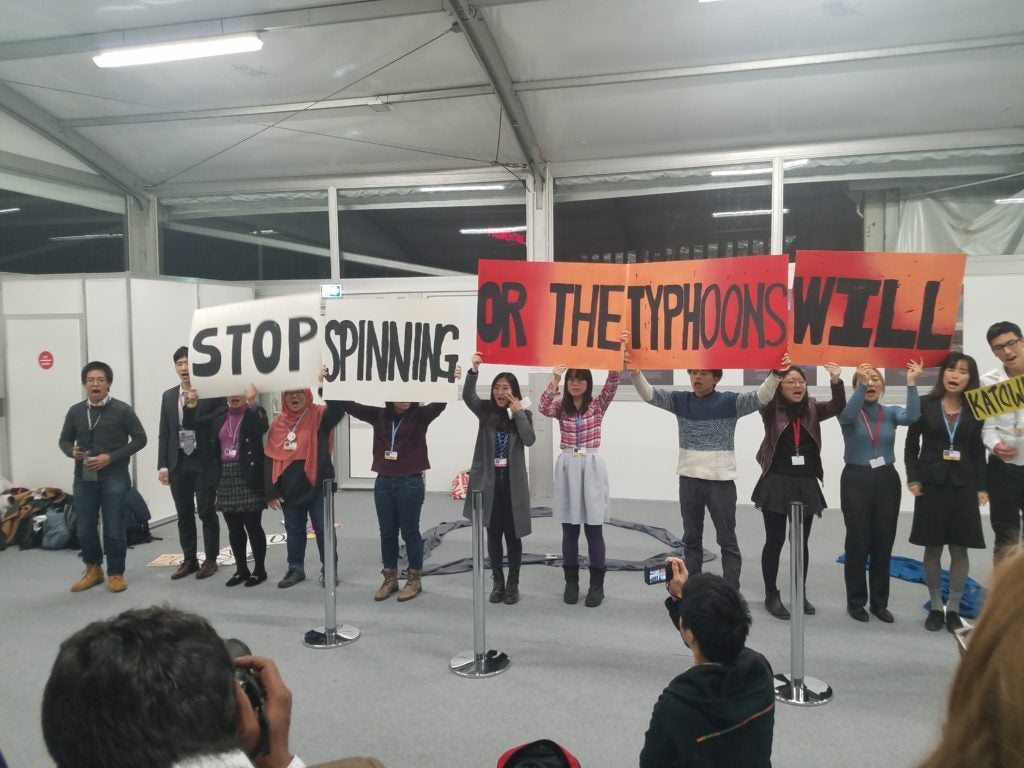 The weather forecasters who helped found Climate Without Borders have the ability to reach about 375,000,000 people, according to the group’s website.

The Daily Signal asked Peeters during the question-and-answer session whether she had any reaction to the so-called “yellow vest” protests that first erupted in Paris prior to the start of the COP24 meeting. The yellow vest protests are directed at French President Emmanuel Macron’s carbon tax policies, which have raised the cost of fuel across the country.

“I’m in Belgium, so I could see this up close, and it is a tough situation,” she said. “It can be a challenge to reach people, but that’s what we are trying to do as weather presenters. We are trying to be climate communicators.”

The aim of Climate Without Borders is mostly to try to identify and communicate what the problem is, rather than advancing specific policy proposals, Chi-Ming Peng, a weather presenter from Taiwan, explained during the panel.

Jaroslaw Kret, a weather presenter in Poland, discussed the challenges of communicating with different audiences. 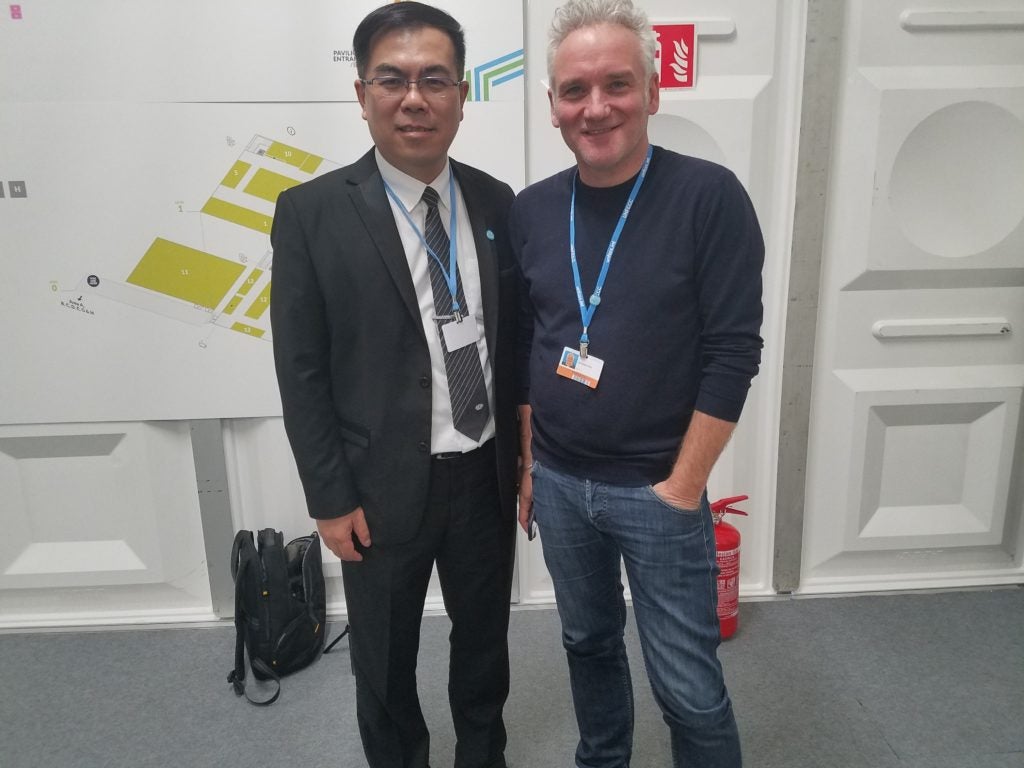 On the left is Chi-Ming Peng from Taiwan and on the right is Jaroslaw Kret from Poland. (Photo: Kevin Mooney/The Daily Signal)

COP24 participants were widely critical of President Donald Trump and his decision to withdraw the U.S. from the Paris Agreement, which was negotiated at the COP21 meeting in Paris and adopted in December 2015.

Trump critics in attendance included the U.S. Climate Action Center, which operates under the #WeAreStillIn hashtag that was prominently displayed in the COP24 exhibit hall. The center draws from a coalition of cities, counties, tribes, faith groups, and colleges and universities that support the Paris Agreement, which calls on participating countries to curb their carbon emissions.

But Craig Rucker, the president of the Committee for a Constructive Tomorrow, a nonprofit based in Washington that favors free-market solutions to energy policy, told The Daily Signal that Trump “made the right call” in withdrawing from the Paris Agreement.

He also pointed to updated scientific research from the Nongovernmental International Panel on Climate Change challenging the findings of the U.N. report, which was released at a media event in Katowice during the COP24 conference.

“The only consensus on climate change that exists is among those in the ‘climate alarmism’ movement,” Rucker said. “There are a growing number of scientists from across the global who point to natural influences as what drives climate, and not human activity.

“The policies that the U.N. is pushing in the name of climate change would be very harmful to average people. That much is made evident by the protests in France,” he added.

Marc Morano, publisher of the Climate Depot website, a project of the Committee for a Constructive Tomorrow, called on Poland and other countries to follow Trump’s lead and withdraw from the Paris Agreement.

“Poland should get out of this treaty and stand up to the United Nations and the European Union,” Morano said in an interview. “Poland could start a movement that begins to unravel this treaty, which will do nothing for the climate, while raising energy prices across the board.”

Morano, the author of the “Politically Incorrect Guide to Climate Change,” described Trump’s decision to pull out of the Paris Agreement as a form of “daring diplomacy” that should be emulated.

The Daily Signal contacted the media spokesperson for the COP24 presidency seeking comment on the Nongovernmental International Panel on Climate Change’s report and the position of U.S. climate change skeptics but did not receive a response.

In many respects, climate skeptics operate at a disadvantage, Rucker said, because they are up against the media, Hollywood, and a public education system that advance what he calls “alarmist theories” on climate.

Although 195 countries that are parties to the U.N. Framework Convention on Climate Change adopted the language of the climate change agreement during the December 2015 COP21 meeting in Paris, the agreement has not been fully implemented.

At the conclusion of the COP24 meeting, almost 200 countries agreed on a rulebook for curtailing global warming that would lead to full implementation of the agreement.

Chile is set to host the COP25 meeting in late 2019. Brazil had initially been selected as the host country, but incoming President Jair Bolsonaro has said he may withdraw his country from the Paris Agreement.