Trump Says Government Shutdown Will Continue Until There’s a Wall 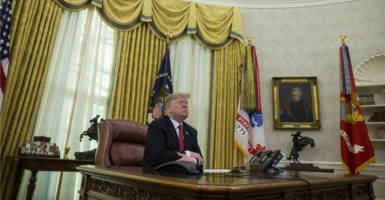 President Donald Trump said the federal government will remain shut down unless there is an agreement on some type of border wall or fence.

“I can’t tell you when the government is going to reopen … [not until] we have a wall, a fence, whatever they’d like to call it. I’ll call it whatever they want. But it’s all the same thing. It’s a barrier from people pouring into our country,” Trump said when talking to reporters on Christmas Day.

Trump’s comments come as Senate Minority Leader Chuck Schumer said Republicans need to “abandon” border wall funding if they want the government to reopen, just less than 24 hours into the partial shutdown. Trump has not budged on the issue, despite Schumer’s comments, adding that it’s a barrier from dangers like drug smuggling.

Incoming acting White House chief of staff Mick Mulvaney warned it is “very possible” the partial government shutdown will run into 2019, as Trump insists funding for the border wall must be included.

The two parties will have to figure out an agreement, and the senators must be present for a vote on the Senate floor to send a bill to the president to sign and end the government shutdown.