Pulling Young Americans Back From the Brink 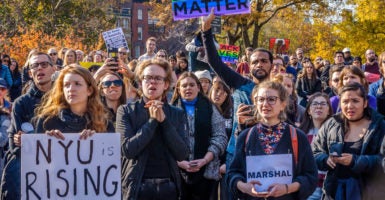 During the 2016 campaign, Hillary Clinton often delivered the line: “America is great, because she is good.”

It was a feel-good line, deployed then as code for “America is too good to elect Donald Trump.”

Notwithstanding the thick irony of Clinton claiming to be the virtuous alternative, her statement on its own terms made sense: If a nation would be great, it must be morally upright—and America, despite all its flaws, is fundamentally good.

This view puts Clinton increasingly on the fringes within her own movement. In 2018, the prophets of wokeness are calling progressives to “wake up” to the reality that America, at its core, is racist, misogynistic, homophobic, transphobic, and economically unjust. The system, they say, is “rigged.”

And today’s young adults are heeding those voices and increasingly embracing their viewpoint.

A recent study showed that 1 out of 5 Americans under the age of 37 do not think Americans should be proud of their history. One out of 5 millennial Americans see the flag as a sign of intolerance and hatred, and 2 out of 5 said it’s OK to burn the flag.

Clinton’s generation, the baby boomers, were most likely to say America has been, is, and will continue to be great, with 70 percent saying so. But only half of Americans under the age of 37 agreed, and a full 14 percent of millennials said America was never a great country to begin with, and never will be.

The survey, which was conducted by the polling firm YouGov and commissioned by the Foundation for Liberty and American Greatness, a nonprofit devoted to restoring civics, showed that it’s not just younger Americans who have a dim view of our nation.

Fifty percent of respondents across all age groups said America is sexist, and 49 percent said it is racist.

The survey does give some reason for hope. Americans across the board remain patriotic in a general sense, and that includes millennials and Generation Z. But the data do show a clear fault line: Young people are more likely to be skeptical and critical of America than their parents and grandparents. This is a growing divide not just between the left and the right, but between the old left and new left.

The older liberals are appalled by President Trump, alarmed by global warming, disgusted by widening income inequality, and so on, but are more likely to believe the structures of society are basically sound. You can make change by voting for the right candidates and passing the right laws. You can change individual minds through education and debate.

The militants are more likely to believe that the system itself is rotten and needs to be torn down. We live in a rape culture, with systemic racism and systems of oppression inextricably tied to our institutions. We live in a capitalist society, a neoliberal system of exploitation. A person’s ideology is determined by his or her status in the power structure.

This divide within the left is real, and it will inevitably impact the nation as a whole if things don’t change.

Clinton is 71 years old. Her views, though certainly liberal, reflect a strong confidence in the goodness of America and our system of government that is common among her generation.

Younger Americans increasingly part with that view—and we shouldn’t be surprised given what is increasingly taught in schools. Students are taught to “see through” inherited institutions and ways of doing things, and to view society in terms of an ongoing struggle between oppressor and oppressed.

This oppressor-oppressed lens doesn’t make much room for the way we’ve traditionally conceived of America. In a world where there are only oppressors and oppressed, there can be no free men and women, no genuine liberty, no real self-government, and no common good. There are only people seeking raw power according to their self-interest.

Such a one-dimensional outlook would leave anyone cynical about America, even life itself. And it has done just that.

Many students have become disillusioned about our society and our system of government, even pushed to despair. And despair turns them into revolutionaries ready to dismantle the system.

Of course, there is much to reject about “the system,” if by system we mean everything coming from Washington, D.C. Conservatives are quick to decry crony capitalism, the growth of the sprawling administrative state, and the misuse of power by life-appointed judges.

But these are corruptions that have grown up around the system, not integral defects within the Founders’ design. Our actual system of representative government, codified by the Constitution, remains fundamentally good. It is a testament to our forebears who slowly wrung liberty from the hands of autocratic rulers—a process dating all the way back to Magna Carta in 1215.

What younger Americans on the left need to appreciate is that our Constitution and political traditions are essential for achieving even their own liberal vision of justice.

This system has secured a host of gains that liberals often take for granted, from the abolition of slavery to the enfranchisement of women and the civil rights movement. Each of these hard-won advances was achieved through our system of representative government, and to this day they are preserved by the rule of law.

By design, our system makes it very difficult to change the law, but equally difficult to undo changes from the past. It turns out “the system” is actually your friend if you care about preserving past achievements.

This means every American who seeks to change policy—whether liberal or conservative—must take on the mindset of a reformer, not a radical. Before we even enter the policy arena, we must settle it in our minds that the system we are partaking in—the exquisite structure of republican government handed down from centuries past—is not up for debate.

This American project is an achievement of human civilization, and though it may fall short at times, it’s the best shot at justice we have. We tear it down at our own peril.