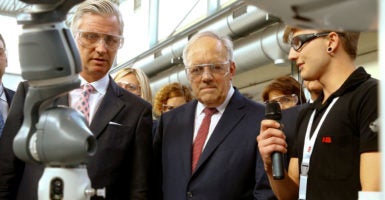 The United States and Switzerland on Dec. 8 launched a new, pragmatic partnership by signing a memorandum of understanding on apprenticeships.

The notable signing ceremony was attended by Swiss Federal Councilor Johann Schneider-Ammann, who is in charge of economic affairs, education, and research; the U.S. secretaries of Education, Labor, and Commerce; and first daughter Ivanka Trump, along with other key officials of the two countries.

With Secs DeVos, Ross & Acosta & Swiss officials for the signing of the MOU that will encourage Swiss companies to invest in America’s workers!
Thank you to the 20+ Swiss companies that signed our #PledgeToAmericasWorkers & created NEW opportunities for 40,000+ Americans! ?? ?? pic.twitter.com/qQkImEIWcy

The agreement will build on ongoing practical collaboration between the two longtime partners to encourage businesses and stakeholders to promote the value of vocational training and to develop effective strategies to advance work-based learning.

For some months, the U.S. has been looking at Switzerland’s system combining education with an apprenticeship at a host company.

The Alpine nation’s apprenticeship programs are well-known for their effectiveness. Among many hallmarks, a defining feature of the Swiss vocational education system is its integration with the labor market. Training is geared to actual demand for vocational qualifications and to available jobs.

In fact, Switzerland has an enviable track record as an adaptive market economy that supports a resilient labor market, with its technological and innovative capacity underpinned by high degrees of openness and regulatory efficiency.

As documented by various international studies, Switzerland is one of the most advanced and capable free-market economies. According to The Heritage Foundation’s annual Index of Economic Freedom, which measures the entrepreneurial environments of 180 economies around the world, Switzerland is the world’s fourth-freest economy, and tops the rankings in Europe.

The strong commitment of Switzerland to free-market capitalism makes the competitive economic dynamo an ideal partner for America.

Going beyond the recently signed apprenticeship accord, the shared values of the United States and Switzerland make the two countries natural, forward-looking economic partners.

Switzerland is a prime candidate for a free trade agreement as one of the “like-minded countries to promote fair-market competition around the world,” and negotiations could result in an early harvest.

Ed Feulner, founder and former president of The Heritage Foundation, recently made the case for a trade agreement with Switzerland: “It’s time for the U.S. trade representative and the White House National Economic Council to fast-track dialogues with their Swiss counterparts in the pursuit of a U.S.-Swiss economic freedom partnership.”

Indeed, the unique opportunity to ratchet up the U.S.-Swiss partnership to the next practical level with a high-quality, targeted trade pact should not be missed.

To that end, it’s notable that during his visit to Washington for the ceremony of the signing of the memorandum of understanding, Schneider-Ammann also met with Deputy U.S. Trade Representative Jeffrey Gerrish.

Noting that “the understanding has improved qualitatively,” Schneider-Ammann observed that it’s “better to invest a bit more [time and effort] in advance so that the actual negotiation of an agreement is more efficient, and, above all, the result is then accepted.”

He’s right, and now’s the time to build up the momentum for a U.S.-Swiss free trade agreement, which makes good sense.

In its quest for more practical and effective trade diplomacy, the Trump administration can pursue an economic freedom partnership with Switzerland that would enhance economic well-being in both countries—and would serve as a pragmatic template for future trade and investment agreements that advance economic liberty and opportunity throughout the world.