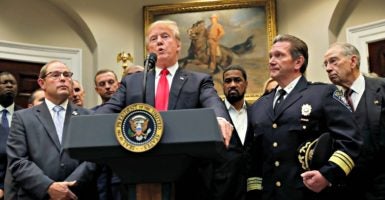 President Donald Trump, flanked by Chuck Canterbury of the Fraternal Order of Police, and Police Chief Paul Cell of the International Association of Chiefs of Police, speaks about the "First Step Act" in the Roosevelt Room at the White House on Nov. 14. (Photo: Leah Millis/Reuters/Newscom)

The bill, titled the “First Step Act,” includes both prison and sentencing reforms, in which many Republicans had been pushing to pass before Democrats take control of the House on Jan. 3. The vote was 87-12.

One failed amendment in the bill would have required the victims of families to be notified when a prisoner was released from prison. That amendment was shot down, 67-32.

The bill gained bipartisan support, even from senators such as California Democratic Sen. Kamala Harris, who said Monday the bill would make the “criminal justice system smarter.”

Senate Majority Leader Mitch McConnell said in a floor speech on Dec. 11 that it is likely the Senate will work between Christmas and New Year’s “if necessary” to pass criminal justice reform legislation before 2019.

Funding for the government was set to expire on Dec. 7. However, the House passed a two-week resolution to avoid a government shutdown by unanimous consent in a voice vote, meaning members did not have to be present for the vote.

The bill was then approved by the Senate, which is in session, funding the government until Dec. 21.