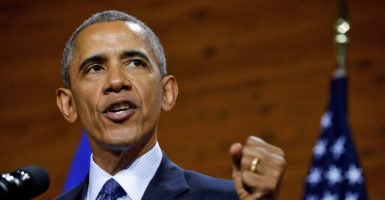 The Obama administration issued guidance that made it difficult for schools to discipline students according to need. (Photo: Kevin Lamarque /Reuters/Newscom)

This year started with a reminder that we cannot take the safety of our children for granted, and Washington has ended the year by taking the issue seriously.

The Federal Commission on School Safety released its final report Tuesday and recommended the removal of federal guidance that has cast the specter of federal investigation over school districts since 2014.

The report calls for rescinding federal directives on student suspensions and expulsions (otherwise known as “exclusionary discipline”) that were based on specious legal grounds and have had troubling results in schools around the country.

The Trump administration created the commission after the tragic event on Feb. 14 at Marjory Stoneman Douglas High School in Broward County, Florida. Among the commission’s responsibilities was to consider whether to recommend that Washington rescind federal guidance issued under President Barack Obama in 2014 that micromanaged local school discipline policies.

Billed as policy guidance to schools to prevent discrimination against minority students, the Obama administration’s “Dear Colleague” letter also contained instructions on how to limit student interaction with law enforcement and alternatives to exclusionary discipline.

Heritage Foundation senior legal fellow Hans von Spakovsky wrote in National Review that this agency-level guidance stands out because it violated federal rules regarding congressional approval for such action.

And a letter drafted by the Wisconsin Institute for Law and Liberty and signed by state-based research institutes questioned the Dear Colleague letter’s use of “disparate impact.” The federal guidance used this legal theory to threaten schools with investigations if schools disciplined students from certain races more often—even if the same students broke rules more frequently than their peers.

In following the guidance, difficult and even dangerous students can remain in class at the expense of other students. Educators in districts following the federal letter such as Oklahoma City and Hillsborough, Florida, report school safety has deteriorated. A study of Philadelphia schools found that student achievement suffered among the peers of offending students when schools limited exclusionary discipline.

The Stoneman Douglas tragedy exposed the fact that Broward County’s student conduct policies (called “PROMISE”) predate the federal letter and may have even inspired the guidance.

Many of the same provisions and approaches to limiting exclusionary discipline are found in both documents. The district’s safety net proved to have holes too big to stop a student with a record of threats and assaults from committing more violence.

Yet after Feb. 14, county officials defended PROMISE by saying the policy had nothing to do with the disastrous event.

Broward Superintendent Robert Runcie dismissed claims that PROMISE was to blame as part of a witch hunt. “It goes with the whole narrative that anything under the Obama administration is no good and we have to get rid of it,” said Runcie, who had been honored by the Obama White House for PROMISE.

Remarkably, county officials later admitted that the alleged shooter had been referred to PROMISE, but they had no record of what was used to treat the individual.

Kenneth Preston, a Broward County student who challenged the district’s actions after the school shooting, said in an interview, “Rescinding the [federal] guidance is a huge part of this. That obviously in our situation wasn’t the only factor, but it was a huge factor in that student not having an arrest record or having a lot of school discipline.”

“The students that knew something told adults and the adults didn’t do something,” Preston says.

The Federal Commission on School Safety’s report said, “The guidance sent the unfortunate message that the federal government, rather than teachers and local administrators, best handles school discipline. As a result, fearful of potential investigations, some school districts may have driven their discipline policies and practices more by numbers than by teacher input.”

By recommending Washington remove the guidance, the commission lets parents, school officials, and law enforcement turn to “local solutions” that are “best suited for dealing with the unique needs of local communities.”