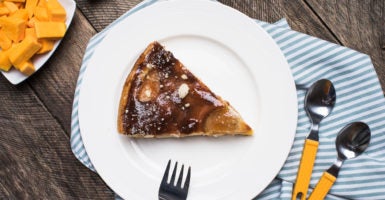 While the holiday pie will invariably run out—and according to a survey, the pumpkin pie does first—we shouldn’t think of the so-called “economic pie” in the same way. (Photo: Ingram Publishing /Newscom)

During the holiday season, the weather cools and families gather, and we anticipate a delicious family dinner. When dinner comes to a close, we enjoy a classic tradition, pie.

When we’re surrounded by loved ones, what could be better?

But while the holiday pie will invariably run out—and according to this survey, the pumpkin pie does first—we shouldn’t think of the so-called “economic pie” in the same way. The term “economic pie” refers to the amount of wealth in a given state, country, or even the world.

Support for protectionist policies, such as tariffs, can come from a belief that economic growth is a zero-sum game; that is, that in trade, one nation always gains at the expense of another.

In reality, the world’s potential for wealth and productivity is not so limited.

For centuries now, the world has enjoyed unprecedented levels of human progress and economic development. In what is referred to as the “hockey stick” of human progress, the chart below shows that world gross domestic product has skyrocketed over the past 250 years.

According to this graph, the pie is getting bigger and bigger.

Many factors contribute to economic growth, including trade liberalization and increased labor productivity. These principles are at the heart of a free-market economy, which lends itself to individual advancement.

In the most successful countries, the average citizen now enjoys a material standard of living that would have made the greatest king of [200] years ago turn green with envy.

But despite incredible gains in overall wealth, some argue that certain industries need government protection, even in advanced economies, such as that of the United States.

One of the most frequently heard arguments is that American manufacturing—which is said to have peaked around 1980 and undergone an overall decline since—needs tariffs to compete against manufacturers in other countries.

A quick look at the facts, however, shows that the U.S. manufacturing sector has become bigger and more productive as trade has expanded, although major advancements in technology may have crimped demand for low-skilled workers in the sector.

Instead of focusing on protecting certain sectors from foreign competition, we should pursue economic freedom, enabling further innovation.

Domestic and international economic development are not mutually exclusive, and in a free market, declining sectors are replaced organically by other efficient industries.

Innovation creates value for producers and consumers, and an unfettered economy sets the stage for these mutually beneficial transactions.

As the creators of The Heritage Foundation’s Index of Economic Freedom put it:

Economic freedom is at its heart about individual autonomy, concerned chiefly with the freedom of choice enjoyed by individuals in acquiring and using economic goods and resources. …

No alternative systems—and many have been tried—come close to the record of free-market capitalism in promoting growth and enhancing the human condition.

So, this Christmas season, let’s give thanks for the ever-growing economic pie, and remember that the greatest catalyst for economic development is a free market, not protectionism.