By Democrats’ Own Standard, We Have a Judicial Vacancy Crisis 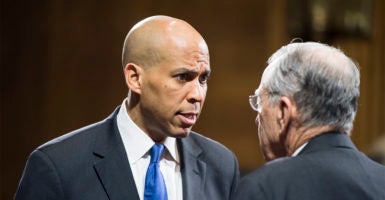 Sen. Cory Booker, D-N.J., is among the cadre of congressional Democrats that has warned of a judicial vacancy crisis in recent years, and the problem has only gotten worse. Pictured: From left, Booker and Sen. Chuck Grassley, R-Iowa, talk before the start of the Senate Judiciary Committee markup hearing in the Dirksen Senate Office Building on Thursday, Nov. 15, 2018. (Photo: Bill Clark/CQ Roll Call/Newscom)

Words like “crisis” are in the eye of the political beholder. But it’s hard to pick a better one to describe the current state of vacancies in the federal courts.

Today, 126 positions on the U.S. District Court and U.S. Court of Appeals are vacant. In fact, we’re in the longest period of triple-digit vacancies in 25 years. But the raw numbers don’t tell the full story, so, since the partisan environment is so bitter, let’s apply some standards advocated by Democrats to put these numbers in perspective.

The Administrative Office of the U.S. Courts designates as “judicial emergencies” the vacancies that have been open the longest and have the most negative effect on the caseloads of sitting judges.

In March 2012, Democratic Whip Richard Durbin, D-Ill., said that 35 judicial emergency vacancies would cause the administration of justice to suffer “at every level.” Not only are judicial emergencies 80 percent higher today, but they have been open an average of 24 percent longer than when Durbin warned about this crisis.

Approximately 45 federal judges leave their position each year, and Senate Democrats have complained when judicial confirmations do not keep up with attrition—at least when there is a Democratic president. Vacancies today are 17 percent higher than when President Donald Trump took office. Four of the previous five presidents saw vacancies decline by an average of 24 percent at this point.

In November 2013, Democrats said that taking separate votes to end debate on unopposed nominees was “obstruction and abuse of Senate rules.” After all, if no senator opposes the nominee, it should be easy to schedule a quick confirmation vote without the formal process of filing and voting on a motion to end debate.

There’s more where these came from, but the point should be obvious. Under any standard used by Democrats in the past, the current sustained level of judicial vacancies is a serious problem—and its cause is equally clear. Even though Trump’s nomination pace, and the Judiciary Committee’s hearing pace, is ahead of previous presidents, confirmations lag and vacancies remain high.

As Leahy put it in 2014: “Such obstruction is not worthy of the Senate, and the resulting judicial vacancies do great harm to the judicial system.”

The Senate has confirmed judges during 10 of the 11 lame-duck sessions following a midterm election since World War II. The last two, in 2014 and 2010, the Senate confirmed an average of 23 judges. While it doesn’t look like even that’s going to happen in the closing days of the 115th Congress, a larger Republican majority in the 116th must push forward to address this vacancy crisis.