Why Our Country Needs the Wall, and Now 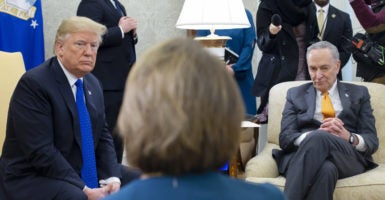 The United States is the most generous, pro-immigrant country in the world. Annually, we take in more immigrants than any other country on the planet.

Couple that with the fact that immigration has been a driving issue in the last two campaign cycles, and it is more than reasonable to demand that the next funding bill include commonsense border security measures.

With only days left before Congress gavels out and the power in the House of Representatives shifts from Republicans to Democrats, we, as members of Congress, must fulfill the promises we made to the American people to uphold the rule of law and secure our borders.

Congress must fund President Donald Trump’s border wall and close the “catch and release” loopholes in the upcoming must-pass spending bill. We must do it now.

The statistics are frightening. This fall, Border Patrol arrested a massive number of people coming across the border, as loopholes in our immigration laws continue to pull illegal aliens into the United States—more than 100,000 people in October and November alone.

These significant illegal immigration attempts are giving immigrants a bad name. Historically, immigrants to America have come here legally to seek a better life and contribute to our economy. In the case of illegal immigrants, their very first act on U.S. soil is to break the law.

That’s why it is critical that we stop the inflow. Doing so will allow us to focus on reforms that prioritize legal immigration and reward law-abiding people for doing the right thing. And we know how to do this: a border wall, and ending catch and release.

Catch and release is the natural result of a series of loopholes in current U.S. asylum laws that encourage lawbreaking. Because of various legal settlements and the unintended consequences of a 2008 law, when families come to the U.S. to claim asylum, they are released out of legal custody into the country to await a hearing. Many never show for their hearings, and simply disappear into America.

We need to pair this with a border wall, so that illegal immigrants cannot physically cross our border in the first place. And we know border walls work. When Israel constructed a barrier along its southern border, it cut down on illegal immigration by 99 percent. Along the U.S.-Mexico border, in the places where we currently have strong barriers, illegal crossings have also been drastically reduced.

Like so many entrenched, partisan issues in our country, the problem of illegal immigration is solvable, but will require compromise.

A good place to start will be with border security measures that Democrats have historically agreed to, and closing loopholes in current laws. Then, we can get back to doing what we have historically done best: welcoming legal immigrants from around the world with open arms.