Prison Reform Should Be a Conservative Priority, Mike Lee Argues 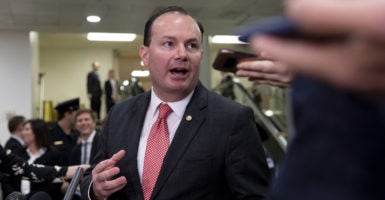 “We've seen what happens when we take away somebody's brother or son or uncle or nephew or father and we warehouse them for decades at a time,” Sen. Mike Lee, R-Utah, says of the need for prison reform. (Photo: Alex Edelman/UPI/Newscom)

One of the Senate’s conservative stalwarts, Mike Lee of Utah, says lawmakers should pass a criminal justice reform bill before the end of the year because it is necessary to the nation’s well-being.

“We’ve seen what happens when we take away somebody’s brother or son or uncle or nephew or father and we warehouse them for decades at a time,” Lee said Thursday during a press conference in the Senate Visitors Center.

“It’s not always a good outcome, it’s not always the outcome that we claim to want as a society, which is to protect innocent Americans from the dangers of crime,” the Utah Republican told reporters.

Senate Majority Leader Mitch McConnell, R-Ky., has promised a vote on the criminal justice overhaul. House Speaker Paul Ryan, R-Wis., has said his chamber will vote before lawmakers leave for the holidays and Democrats take over the House at the start of the new year.

The bill before Congress, the First Step Act, says it “incentivizes prisoners to participate in evidence-based programming designed to reduce recidivism.”

It also offers assessment programs for risks and needs, and gives low- and minimal-risk inmates a chance to obtain credits to serve “a limited part of their sentence” in a prerelease facility.

Prisoners who are ineligible include those serving time for crimes such as smuggling aliens into the U.S. who have records of aggravated felony, which carry harsh consequences for noncitizens upon conviction.

Also ineligible are those convicted of female genital mutilation, bringing in aliens for the purposes of prostitution, drug-related robberies involving assault with a dangerous weapon, and carjacking resulting in serious bodily injury.

Former Virginia Attorney General Ken Cuccinelli said he supports the bill because it embraces prison reform programs that have been successful across the country.

“This bill advocated and advanced by Sen. Lee, and many others to whom I’m grateful, is tough on crime,” Cuccinelli said. “It will lower crime. How do we know it will lower crime? We’re using methods that have already been tried in the states and have worked.”

John Malcolm, director of the Edwin Meese III Center for Legal and Judicial Studies at The Heritage Foundation, said during the press conference that criminal justice reform is critical because it is a public safety issue for communities across the country.

“Ninety-five percent of the people who are presently incarcerated at some point will be back to our neighborhoods,” Malcolm said, adding:

We should care deeply about what kind of shape they are going [back] in…. Recidivism rates of nearly 50 percent of federal inmates and over 75 percent of state inmates is simply unacceptable. The First Step Act will provide [support for] low-risk offenders who could become productive members of society.