John Bolton: US Must Curb Chinese, Russian Influence in Africa 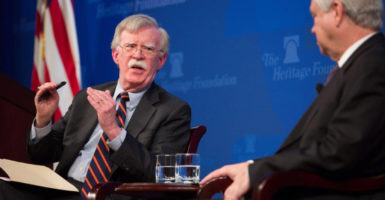 The United States must revamp policies toward Africa on improving trade, fighting terrorism, and providing financial assistance to stave off the growing influence of China and Russia on the continent, White House national security adviser John Bolton said.

“Great power competitors, namely China and Russia, are rapidly expanding their financial and political influence across Africa,” Bolton said Thursday in an address at The Heritage Foundation in Washington. “They are deliberately and aggressively targeting their investments in the region to gain a competitive advantage over the United States.”

China’s “One Belt, One Road” strategy is a plan to develop a series of trade routes leading to and from China.

Zambia and Djibouti are among African countries that owe billions in debt to China; the communist regime is leveraging this debt to take over a utility company and expand military bases, Bolton said.

Russia, meanwhile, is using “corrupt economic dealings” to expand its influence in Africa, including selling arms to African countries in exchange for votes at the United Nations, he said.

These U.N. votes “keep strongmen in power, undermine peace and security, and run counter to the best interests of the African people,” he said.

Bolton said the United States, through previous Republican and Democratic administrations, failed to grasp the strategic importance of African countries.

“It has been an uneven performance by the United States, an uneven appreciation of Africa,” Bolton told The Daily Signal during a press conference after his remarks at Heritage. He added: “It wasn’t that the continent was ignored. It was simply that it did not fit coherently into an overall American foreign policy.”

“I think China, it’s very understandable what they’re up to. That is, they have systematically tried to monopolize natural resources in particular in countries all around the world,” Bolton said, adding:

The ‘One Belt, One Road’ initiative is a multidecade-long project. One could say that China thinks over a longer strategic period than we do. Americans have their vices and virtues. We are an impatient people. It’s one reason we are the country we are today. It has downsides in that [we] don’t necessarily think in longer-term strategy.

“I think the Russians are much more opportunistic, and it has to do with Putin’s desire to re-establish Russia as a world player,” Bolton said. “They’ve been involved in various African countries before, and this is an effort to get back into the game.”

The Trump administration’s strategy for Africa also focuses on ensuring tax dollars are effectively used, he said, noting the United States has spent billions there without seeing progress in stopping terrorism and corrupt governance.

“From now on, the United States will not tolerate this longstanding pattern of aid without effect, assistance without accountability, and relief without reform,” Bolton said during his remarks.

During the press conference after his speech, Bolton also told The Daily Signal that some of the changes in financial assistance could require action from Congress.

The Trump administration is developing an initiative called Prosper Africa that he said will support U.S. investment across the continent, grow Africa’s middle class, and improve the overall business climate in the region.

“I think we probably want additional legislative authority on some aspects of the Prosper Africa approach,” Bolton told The Daily Signal, adding:

Part of the issue that we’ll confront is the proliferation of aid programs across the departments and agencies, coordinating them more effectively from the U.S. government approach.

But also, as I said in the speech, I think you have to look at part of this as whether and to what extent we want to reallocate U.S. resources away from multilateral institutions away from bilateral programs. The argument being they are more effective that way and there is more direct American involvement. But that’s an issue we’re still discussing.

On trade, the administration will focus on economic partnerships that benefit the United States and also help African countries “thrive, prosper, and control their own destinies,” Bolton said during his speech.

He said any sound strategy must focus on preventing the rise of terrorist groups on the continent.

“In recent years, ISIS, al-Qaeda, and their affiliates operating in Africa have increased the lethality of their attacks, expanded into new areas, and repeatedly targeted U.S. citizens and interests,” Bolton said.