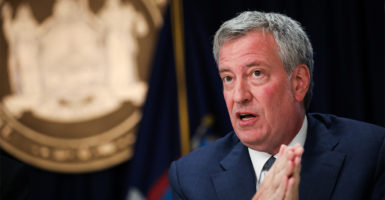 New York City Mayor Bill de Blasio's political ideology can be traced back to his time with the Sandinistas in the 1980s. (Photo: Jeenah Moon/Reuters/Newscom)

Alexandria Ocasio-Cortez, representative-elect for New York’s 14th Congressional District, is widely known as the nation’s cheerleader-in-chief for socialism. But even she might have a tough time getting to the left of another Empire State politician: New York City Mayor Bill de Blasio.

Many liberals soft-pedal their love of big government. They avoid using the s-word, of course, but they go further, using hard cases to justify policies that shift power away from the people and toward the government.

Not de Blasio. He was demonstrating a deep commitment to socialism before Miss Ocasio-Cortez was even born.

He was such a huge supporter of Nicaragua’s Sandinistas in the 1980s that he not only raised money for them, he even traveled there to help provide aid.

“But he returned with something else entirely,” The New York Times noted in a 2013 profile of de Blasio, “a vision of the possibilities of an unfettered leftist government.”

Many young activists wind up tempering their enthusiasm over the years. Age brings knowledge, experience, and maybe a little wisdom. They discover that the feel-good promises of socialism aren’t nearly as workable in reality as they appear to be in theory.

Again—not de Blasio. Thirty years later, he doesn’t seem to have learned much at all.

“I have an activist’s desire to improve people’s lives,” he said in the Times profile. Which sounds nice until you realize that, like other socialists, he means to “improve” your life on his terms, leaving you with no real say in the matter.

Conservatives often have to decode what left-leaning politicians say in support of what we call the “nanny state.” De Blasio, however, just lays it all out for us.

Asked in an interview last year for New York Magazine what prevents him from making more progress on “income inequality,” de Blasio replied:

What’s been hardest is the way our legal system is structured to favor private property. I think people all over this city, of every background, would like to have the city government be able to determine which building goes where, how high it will be, who gets to live in it, what the rent will be.

I think there’s a socialistic impulse, which I hear every day, in every kind of community, that they would like things to be planned in accordance to their needs. And I would, too.

See? All of you people out there thinking that you own the things you’ve bought—you’re the problem. If only you’d sit back and let your government overlords run your little lives, you’d be so happy. Right?

Unfortunately for de Blasio and his fellow lefties, the track record of socialism completely undermines their pie-in-the-sky rhetoric.

Supporters of socialism like to point to Norway and other prosperous Scandinavian countries to make their case. But these countries are “operating generous welfare states programs propped up by underlying vibrant capitalism,” as columnist David Harsanyi has written, so it’s disingenuous to use them as case studies.

Undiluted socialism produces quite a different result. Consider Cuba, a vibrant and modern island nation before Fidel Castro and his cronies ran it into the ground.

Or take Venezuela with its empty food shelves. It was once one of the wealthiest nations in South America. Today it’s a wreck. The Atlantic explains why:

The experiment with ’21st-century socialism’ as introduced by the late President Hugo Chavez, a self-described champion of the poor who vowed to distribute the country’s wealth among the masses, and instead steered the nation toward the catastrophe the world is witnessing under his handpicked successor [Nicolas] Maduro, has been a cruel failure.

If de Blasio gets his way, New York’s troubles will only worsen. History shows that the only way to “improve” people’s lives is to not impede their freedom to do so themselves.

Americans have an “impulse,” all right, but it’s not toward socialism. It’s toward liberty. Power-hungry politicians may not like that, but they thwart it at their peril.