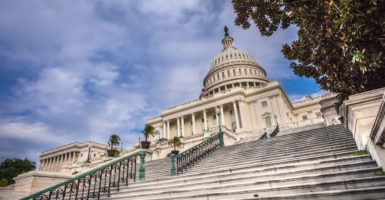 The text of H.R. 299 may be inserted into a continuing resolution package along with other deficit-increasing provisions before Christmas. (Photo: dkfielding/Getty Images)

As the 115th Congress comes to a close, America is once more faced with the prospect of legislators who have retired or been voted out of office being in a position to make bad decisions on their way out the door.

A renewed push to pass questionable legislation for veterans of the Vietnam War is the latest example of this.

With the general public largely distracted by the holiday season, politicians seem emboldened to act with complete impunity. It has become commonplace to see tax breaks for well-connected industries, mammoth spending packages, and other unsavory proposals passed at the 11th hour.

While it might seem odd to include the Blue Water Navy Vietnam Veterans Act in that category, there are many reasons to be skeptical about it.

H.R. 299, which passed the House in June by a margin of 382-0, would extend “presumption of service connection” coverage to additional service members for certain diseases that have been linked to exposure to the Agent Orange defoliant.

That means that if a veteran in this new category were diagnosed with one of those diseases, the federal government would pay for treatment. That sounds reasonable, since there’s a strong consensus in favor of covering veterans for bodily harm they receive in service to the country.

Where the legislation raises further questions is related to the group of veterans that would be added—namely, those in the Navy who are known to have never set foot in Vietnam. This group, known as the Blue Water Navy, comprises between 70,000 and 90,000 veterans.

Since Agent Orange was only used on land, there’s reason to be skeptical that sailors located miles from shore would have been meaningfully exposed to the chemical. That skepticism is shared by the current Department of Veterans Affairs and the first VA secretary under President George W. Bush.

The lack of scientific evidence to support extending “presumption” coverage to Blue Water Navy veterans can be seen in a 2011 report by the National Academy of Sciences.

Supporters of H.R. 299 have relied on dubious hypothetical scenarios and heavy-handed emotional language. The unspoken implication is that expansions of benefits for veterans should not be questioned.

However, adding thousands of patients to the VA system for conditions that might not have been caused by their service would make the system less responsive for veterans who need and deserve help the most.

Currently, H.R. 299 is being held up from receiving “unanimous consent” in the Senate by Sen. Mike Enzi, R-Wyo., chairman of the Senate Budget Committee, along with Sens. Mike Lee, R-Utah, and Rand Paul, R-Ky.

These senators raise legitimate concerns and should be commended for taking an unpopular stand to protect taxpayers from undue cost burdens and to protect the integrity of veterans’ benefits.

Lee points to a study on the issue that will be released by the VA next year that may finally determine whether Blue Water Navy veterans have been affected by Agent Orange.

If the report draws a conclusive result that certain Navy veterans have suffered from the chemical, then extending related medical coverage to those veterans—and paying for that coverage to prevent a federal deficit increase—could be fully warranted.

Legislators should wait on the report before making a decision.

There are real costs associated with this potential expansion of medical coverage. The Congressional Budget Office has estimated that H.R. 299 would lead to more than $2 billion in new spending on medical care over the next decade, plus millions spent for personnel to process the claims.

To put that $2 billion in perspective, consider that the average personal income in the prosperous Atlanta area (home to Sen. Johnny Isakson, R-Ga., chairman of the Senate Veterans’ Affairs Committee) is $50,000 per year.

It would require the hard work of 40,000 Atlanta-area people for a whole year to pay for these new benefits. Legislators should not give away the value of people’s efforts lightly.

Making matters worse, the costs could be passed on to younger and future generations. The deficit (or the difference between taxing and spending) will likely exceed $1 trillion for the current fiscal year.

Although H.R. 299 would attempt to partially cover new spending by increasing fees for subsidized home loans to veterans, most of the spending would be put on the national credit card.

Given the high likelihood of a year-end, “must-pass” spending package just before Christmas, there’s a chance that the text of H.R. 299 will be inserted into the bill along with other deficit-increasing provisions.

Legislators would likely pat themselves on the back for such a move. In reality, however, it would be the equivalent of a lump of coal in the stocking for children, who will be paying interest on the nation’s unconscionably large debt in decades to come.

When it comes to providing medical care to veterans, Congress has an obligation to be thoughtful and proceed with all the facts in hand. The Blue Water Navy issue should be resolved after the forthcoming VA study is released, rather than as a result of political pressure.