Put Human Rights Back on the Negotiating Table With North Korea 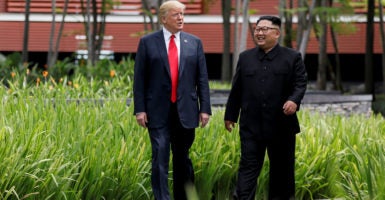 President Donald Trump and North Korea's leader Kim Jong Un walk together before their working lunch during their summit on the resort island of Sentosa, Singapore, on June 12, 2018. (Photo: Jonathan Ernst/Reuters/Newscom)

Hyun Suk Kim is an ASAN visiting fellow in the Asian Studies Center at The Heritage Foundation.

Some of the world’s worst human rights violations take place in North Korea.

To highlight these serious abuses, The Heritage Foundation hosted a panel discussion on Oct. 29 with experts Jung Pak of the Brookings Institution, Dan Aum of the National Bureau of Asian Research, and Greg Scarlatoiu of the Committee for Human Rights in North Korea to examine ways to integrate human rights into U.S. negotiations with North Korea.

The purpose of the discussion was to demonstrate that advancing human rights in North Korea and making progress in nuclear negotiations are not mutually exclusive propositions.

In spite of this, human rights issues played little to no role in negotiations with North Korea at the Singapore summit in June.

If that’s the case, then both issues should be raised in tandem in negotiations with Pyongyang.

In fact, human rights abuses are part of the reason the regime maintains its grip on power. Fear of detainment for dissenters and their families renders freedom of expression nonexistent.

Inhumane penalties against political dissenters, including the threat of having three generations of their family sent to a political prison camp for voicing opposition to the regime, leave the vast majority of North Koreans powerless.

Addressing these human rights issues can empower the people to confront the regime and its anti-American propaganda. Diplomatic resources may best be utilized supporting the people, rather than entertaining the regime.

Prisoners in “kyohwaso” (re-education camps) are conscripted to lives of hard labor with no pay in inhuman living conditions. It’s estimated that forced labor in North Korea generates $975 million annually for the regime.

Prison camps also serve as a testing ground for the development of weapons of mass destruction in North Korea. Reports from defectors indicate that chemical weapons are being widely developed and tested on political prisoners, for example.

Leaving such atrocities against human rights unchecked will continue to reinforce the Kim regime, regardless of new diplomatic advancements with the U.S.

According to Aum, human rights is a powerful tool for suasion. Counter to the common understanding that North Korea avoids any discussion of human rights, history shows that putting pressure on Pyongyang produces measurable results.

For example, in 2014, when the U.N. General Assembly took recommendations from the U.N. Commission of Inquiry reports on human rights, North Korea responded by sending its representative to the U.N. for the first time in 15 years.

For real progress to be made in North Korea, addressing human rights abuses must be a main objective, not a collateral goal.

As Heritage analysts have long argued, the U.S. should find ways to integrate human rights into negotiations with North Korea.

It’s time for America to once again be a voice for the voiceless in North Korea and to press Kim to improve his treatment of the North Korean people.