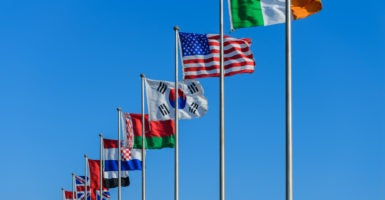 The U.S. announced one year ago that it would not participate in the migration compact. (Photo: bjdlzx/Getty Images)

On Dec. 10-11 in Morocco, most of the world’s nations will sign on to the United Nations’ Global Compact for Safe, Orderly and Regular Migration.

The U.S. will not be signing the migration compact—and that’s the correct decision from public policy, national security, and national sovereignty standpoints.

The migration compact was initiated when the U.N. General Assembly unanimously adopted the New York Declaration for Refugees and Migrants in September 2016.

While the Obama administration enthusiastically supported the New York declaration and the migration compact, the Trump administration has had serious concerns about its provisions and requirements that are inconsistent and contrary to our immigration policy.

On Dec. 2, 2017, the United States announced that it would not participate in the migration compact, as explained by U.N. Ambassador Nikki Haley:

America is proud of our immigrant heritage and our long-standing moral leadership in providing support to migrant and refugee populations across the globe.

No country has done more than the United States, and our generosity will continue. But our decisions on immigration policies must always be made by Americans and Americans alone. We will decide how best to control our borders and who will be allowed to enter our country.

The global approach in the New York Declaration is simply not compatible with U.S. sovereignty.

The decision to end U.S. participation was controversial and unfairly criticized by U.N. officials and human rights groups.

Since the U.S. decision, however, other nations have likewise signaled that they would not sign the migration compact because of concerns that “it tramples on national sovereignty” and “does not distinguish sufficiently between economic migrants and people in genuine need of international protection.”

At least 10 other nations are expected to join the U.S. in not signing the migration compact, including Australia, Bulgaria, the Czech Republic, Israel, and Poland.

In addition, the compact is causing political controversy and turmoil in some places that its supporters might consider unlikely, such as Belgium, Germany, Denmark, and the Netherlands.

The concerns voiced in these countries mirror those of U.S. officials. For example, while the migration compact says that it is the sovereign right of states to “govern migration within their jurisdiction,” they can only do so to the extent it is “in conformity with international law.”

That’s a direct limitation on the constitutional authority of our government to determine our immigration policy regardless of international law.

Similarly, the migration compact says that the due process rights and access to justice provided to migrants must be “consistent with international law.” That imposes another limitation on the authority of the U.S. to determine its immigration policy and the extent of the due process procedures that will be provided to illegal aliens.

There are other, similar caveats contained throughout the migration compact, such as a requirement that a country’s migration policy be consistent with the U.N.’s nonbinding 2030 Agenda for Sustainable Development.

It directs that detention of illegal aliens should only be “a measure of last resort,” a policy that would release large numbers of illegal aliens into the interior of the U.S., where they could disappear and defy our immigration laws.

The migration compact has many other provisions that would extend asylum rights and provide access to a variety of government benefits far beyond what U.S. immigration law provides.

In general, it is in accord with the push by liberal advocacy groups to extinguish the line between legal and illegal immigration to the greatest extent possible.

In addition, the migration compact states that it rests on a number of international agreements, which is important, considering the compact’s frequent references to international law.

Strangely, it makes no distinction between commitments that are legally binding and those that are not—citing, for example, the International Covenant on Civil and Political Rights and the United Nations Framework Convention on Climate Change, alongside the Paris accord and the 2030 Agenda for Sustainable Development.

The U.S. should avoid even implying that agreements and treaties that it has not ratified constitute binding commitments on this country.

Defenders of the migration compact argue that U.S. concerns are misguided because country commitments under it are nonbinding. Indeed, supporters of the compact lament the lack of a binding treaty on migration.

The purpose of the compact, however, is to be a steppingstone to that goal. To that end, it lays out common commitments and practices on “all aspects of international migration” that signatories will be pressured to honor.

States that fall short of expectations or interpretations of those commitments by the U.N. and nongovernmental organizations will be accused of bad faith and of abandoning their commitments.

It is important to note that not signing the migration compact would in no way undermine or reverse America’s generous policy on migration.

The U.S. should work with the International Organization for Migration and other relevant entities to implement the migration compact’s sensible provisions, but it is right to protect jealously its discretion and sovereign authority to set its own migration policies that further U.S. interests.

Signing on to the compact provides no additional authority or ability to adjust U.S. migration policy to meet urgent or ongoing needs. It does, however, serve as an invitation for politically motivated criticism and international pressure.

The U.S. is right to weigh the costs and benefits of this approach and find it wanting. The costs far outweigh the benefits.