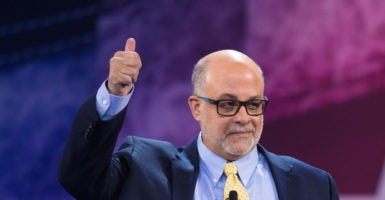 “It was the greatest honor of my life to serve Attorney General Meese at the Department of Justice,” Levin, host of the nationally syndicated “Mark Levin Show,” said Wednesday upon receiving the Outstanding Impact Award, and congratulating Meese for receiving the Lifetime Achievement Award. (Photo: Jeff Malet Photography/Newscom)

“It was the greatest honor of my life to serve Attorney General Meese at the Department of Justice,” Levin, host of the nationally syndicated “Mark Levin Show,” said Wednesday upon receiving the Outstanding Impact Award, and congratulating Meese for receiving the Lifetime Achievement Award.

“I have done many things before and since, but never before have I worked with somebody who was so thoroughly decent, so thoroughly ethical, incredibly brilliant, who cares so deeply about his country, who served as well as any human being could President Ronald Reagan and I might add, George H.W. Bush,” Levin said.

Levin, who worked in Reagan’s administration, is partnering with Glenn Beck to combine The Blaze and CRTV “to create a conservative-media entity dubbed Blaze Media, which they say will reach 165 million people via television, digital platforms and social media,” according to The Hollywood Reporter.

The Impact Awards are hosted by United in Purpose, a conservative policy education organization, and Ginni Thomas, a conservative movement leader and wife of Supreme Court Justice Clarence Thomas.

In announcing Meese’s Lifetime Achievement Award, Ginni Thomas said that the country’s 75th attorney general is a legend of conservatism.

“He is literally our keeper of the Ronald Reagan flame of conservatism,” Thomas said. “Choosing not to join a lobbying firm, or seek the now normal moneyed interest following senior government service, Ed Meese instead went to The Heritage Foundation in 1988 to be an asset to the entire center-right mainstream movement.”

Meese served from 1985-1988 as attorney general in the Reagan administration and then joined The Heritage Foundation in 1988 as the organization’s inaugural Ronald Reagan Distinguished Fellow. He worked as chairman of Heritage’s Center for Legal and Judicial Studies from its founding in 2001 until 2013.

“I am grateful to God for all of the opportunities and the blessings I have received, and the greatest blessing that I have received is my wife Ursula who has been my partner, my friend, and my encourager for whatever I have had to do,” Meese said after thanking Thomas for the recognition.

He also thanked Ed Feulner, founder and former president of The Heritage Foundation, for Feulner’s influence on his life:

For me, personally, he has been the leader, the mentor in many ways, the person that I look to, and certainly what he has done for me to have me at The Heritage Foundation to be a companion and a co-worker and to have the opportunities there. I am eternally grateful to you. Thank you.

The Heritage Foundation’s Bridgett Wagner, vice president for policy promotion, was also one of the 10 awardees recognized.

“With 37 years at Heritage, she has absorbed ideas, prepared briefings, learned the issues, analyzed the people and the players who are making policy,” Thomas said, adding:

In her new role, Bridgett leads the outreach and leadership development teams focused on advancing our principles and policies among allies, public audiences, interns, and young professionals. If you know Bridgett, she is not exactly the kind of person that looks for the spotlight. Instead, Bridgett Wagner is our connective tissue, she is an idea generator.

Candace Owens of Turning Point USA, Tony Perkins of the Family Research Council, and Peter Wood of the National Association of Scholars were also recognized with Impact Awards.