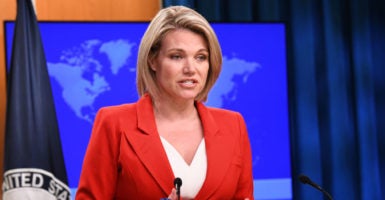 Heather Nauert, tapped to become the next U.S. ambassador to the U.N., is currently the spokeswoman for the State Department, a post she has held since April 2017. (Photo: Xinhua/Sipa USA/Newscom)

“Heather Nauert is capable, well-informed, and articulate,” Clifford May, founder and president of the Foundation for Defense Of Democracies, said in an email to The Daily Signal.

“She is intimately familiar with this administration’s foreign and national security policies. Nikki Haley will be a hard act to follow, but there’s every reason to believe that Heather will manage the trick with grace and distinction,” he said.

Haley announced Oct. 9 that she would be stepping down from the U.N. post, but would serve in that capacity until the end of the year.

Nauert, 48, is currently the spokeswoman for the State Department, a post she has held since April 2017.

Before joining the State Department, Nauert worked for Fox News in New York as an anchor and correspondent, and previously worked as a network correspondent for ABC News.

Nauert received a bachelor’s degree in communications from Mount Vernon College for Women and a master’s degree in journalism from Columbia University.

In announcing her nomination on Twitter, Trump welcomed Nauert and thanked Haley for her service.

“I am pleased to announce that Heather Nauert, spokeswoman for the United States Department of State, will be nominated to serve as United Nations ambassador,” Trump tweeted. “I want to congratulate Heather, and thank Ambassador Nikki Haley for her great service to our country!”

Sam Brownback, international ambassador at large for religious freedom at the State Department, said Nauert is well-suited for the job.

“Heather Nauert—a staunch defender of Israel and #religiousfreedom—is a great pick for U.N. ambassador,” Brownback tweeted. “She was a significant supporter of the Ministerial to Advance Religious Freedom.”

Jim Carafano, vice president of the Davis Institute for National Security and Foreign Policy at The Heritage Foundation, said he is confident Nauert will keep the best interests of the U.S. in mind in her advocacy and leadership at the U.N.

“The U.S. agenda is strong—holding officials and organizations accountable; naming and shaming outrageous behavior; and protecting U.S. sovereignty and American interests. I expect that will continue under Nauert’s leadership,” Carafano said, adding:

Rather than walking away from international organizations like the U.N. and multilateral partnerships like NATO, through his policies and choices of leaders, like Heather, the president has worked hard to make them more effective and ready to deal with the world we face today.

“Heather Nauert has a very detailed understanding of U.S. foreign policy issues, having spent the last year and a half as spokesperson for the State Department,” Gardiner said, adding,

I expect she will very ably continue the tremendous work that Ambassador Haley has carried out at the U.N. in a particularly important time for U.S. foreign policy.