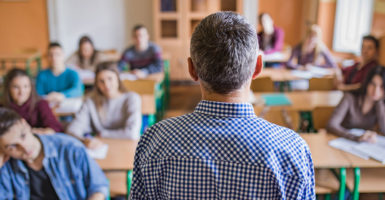 A school board voted unanimously to fire a teacher because his avoidance of pronoun use made a transgender student feel uncomfortable. (Photo: skynesher/Getty Images)

A Virginia high school teacher was sacked Thursday for allegedly misgendering a student, marking the first time in the state that an educator has lost a job for using biological pronouns to refer to a student.

The West Point School Board voted unanimously 5-0 to fire Peter Vlaming who teaches French at the school, according to the Richmond Times-Dispatch.

Vlaming, 47, was charged with discrimination after failing to use male pronouns to address a biologically female student. Vlaming did not intentionally misgender the student, but avoided using any pronouns to address or talk about the student in order to accord with his Christian faith, the Times-Dispatch reported.

“I’m totally happy to use the new name,” Vlaming told local NBC affiliate WWBT. “I’m happy to avoid female pronouns not to offend because I’m not here to provoke … but I can’t refer to a female as a male, and a male as a female in good conscience and faith.”

Vlaming has referred to the student as a female, according to the Times-Dispatch. The teacher was placed on paid administrative leave in October.

Vlaming’s avoidance of pronoun use made the transgender student feel singled out, according to the report.

Following a complaint about Vlaming’s behavior, school administrators claimed that Vlaming had transgressed school harassment and nondiscrimination policies. “Mr. Vlaming was recommended for termination due to his insubordination and repeated refusal to comply with directives made to him by multiple WPPS administrators,” Abel said in a statement.

West Point High School’s policies include protections for persons who identify as transgender but include no specific language on pronoun use.

“One of those rights that is not curtailed is to be free from being compelled to speak something that violates your conscience,” his lawyer Shawn Voyles said, according to the Virginia newspaper.

Numerous teachers and students have displayed an outflowing of support for Vlaming, according to the Times-Dispatch. Some raised questions about the fairness of Vlaming’s firing for allegedly violating a policy that does not exist or is not clear.

“If there’s no policy in place, how can they just let him go?” West Point High School parent Jennifer Haynes said, the Times-Dispatch reported.

The incident at West Point High School is not the first time a teacher has been fired for misgendering a student.

Math teacher Joshua Sutcliffe allegedly said “well done girls” to two students—one of whom was transgender—at an Oxfordshire secondary school in England. He was suspended for six weeks before being fired over the offense in December 2017. He filed a lawsuit shortly thereafter.

Twitter banned the use of biological pronouns to refer to transgender persons, adding a clause prohibiting the practice to its policy regarding hateful conduct in October. “Targeted harassment or expressing hate towards a person, group, or protected category” is banned, according to Twitter’s hateful conduct policy.