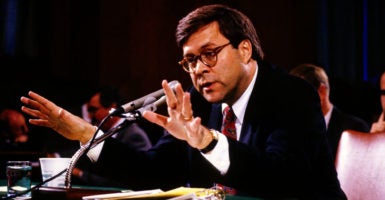 William Barr is a former U.S. attorney general, an advocate of investigating Hillary Clinton, and a bagpipe player for 60 years.

President Donald Trump announced Friday that he would nominate Barr, 68, to serve again as attorney general.

He previously served in the position from November 1991 to January 1993 under President George H.W. Bush, who died Nov. 30 and was laid to rest Thursday.

In confirming to reporters outside the White House that he would nominate Barr, Trump called the lawyer and former business leader “one of the most respected jurists in the country,” a “highly respected lawyer,” and “a terrific man, a terrific person, a brilliant man.”

Already, some Democrats are criticizing Barr for comments he has made in media interviews and op-eds.

“I did not know him until recently when I went through the process of looking at people, and he was my first choice from Day One,” Trump said of Barr. “Respected by Republicans and respected by Democrats, he will be nominated for the United States attorney general.”

Here are six things to know about the president’s pick to run the Justice Department.

Barr’s first stop is the Senate Judiciary Committee, the scene of brass-knuckles partisanship this fall over the confirmation of Supreme Court Justice Brett Kavanaugh.

Trump’s hope is that the Barr confirmation will not be nearly so fraught with partisan rancor.

The senior Democrat on the Judiciary Committee, Sen. Patrick Leahy of Vermont, didn’t come out with guns blazing, but indicated he had questions. Leahy tweeted:

I have known Bill Barr a long time. He has a long record in both the private sector and public service that needs to be thoroughly vetted by the Senate. This includes recent, troubling comments about investigations of keen interest to the President who is nominating him.

I look forward to discussing these issues and others at Mr. Barr’s hearing. I hope he will use the opportunity to unambiguously commit, should he be confirmed, to upholding the rule of law and protecting the Special Counsel’s investigation against any interference.

Sen. Lindsey Graham, R-S.C., slated to become chairman of the Judiciary Committee in January, tweeted that he will do all he can to push through the nomination:

President @realDonaldTrump made an outstanding decision in nominating William Barr to serve as the next #AttorneyGeneral.

Mr. Barr is highly capable, highly respected and will provide new and much-needed leadership for the Department of Justice.

Having previously served as AG under President George H.W. Bush, Mr. Barr is a known quantity, a man of the highest integrity and character, and has an impeccable reputation.

He will provide a strong and steady hand to the fine men and women at the Department of Justice.

I will do everything in my power to push him through the Senate Judiciary Committee and onto the floor of the Senate for eventual confirmation as soon as possible. 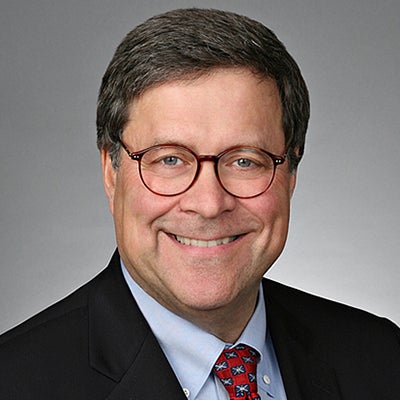 2.  Confirmation and Praise from Joe Biden in 1991

Barr’s first run at a confirmation hearing was anything but controversial.

Like Whitaker, Barr also served as acting attorney general. Just days into that assignment, he impressed Bush with his handling of a hostage crisis at a federal prison in Talladega, Alabama, The Wall Street Journal reported in 1991.

More than 100 Cuban inmates who were awaiting deportation to Cuba took nine hostages. Barr ordered an FBI hostage rescue team to take control of the prison, resulting in the rescue of the hostages without any deaths.

After Bush nominated Barr for attorney general in 1991, the Judiciary Committee unanimously confirmed him, with the approval of then-Chairman Joe Biden, a Democrat from Delaware. (Biden, of course, would go on to become Barack Obama’s vice president in 2009.)

On one of the most contentious issues, Barr was asked about the Roe v. Wade decision in 1973 that legalized abortion across the nation. Barr replied that he didn’t believe the right to an abortion was part of the Constitution.

Biden said he disagreed with Barr, but said it was “the first candid answer” he had heard on the topic.

“It’s astounding to me,” Biden said to Barr. “You should be complimented.”

Biden later said: “I know of no one on the Democratic side asking for a roll call vote [by the committee]. I see no need for one.”

The Senate confirmed Barr as attorney general by a voice vote in November 1991.

Barr is a strong choice by Trump and “eminently confirmable,” said John Malcolm, who was an assistant U.S. attorney working in Atlanta when Barr was deputy attorney general and attorney general.

“He is an excellent pick,” Malcolm, now director of the Edwin Meese III Center for Legal and Judicial Studies at The Heritage Foundation, told The Daily Signal. “He is smart, independent, and knows the Department of Justice’s mission well.”

No one should expect this nomination to go as smoothly as the last time, Malcolm said.

“Very few Trump nominations get through without resistance,” Malcolm said. “The Democrats will want to extract promises from him that he will protect the Mueller investigation.”

For nearly two years, a team led by special counsel Robert Mueller has looked for evidence of coordination between the Trump campaign and Russia to secure Trump’s election as president in 2016.

While serving as the nation’s 77th attorney general, Barr presided over significant events and investigations.

Andrew McCarthy, who was an assistant U.S. attorney for the Southern District of New York when Barr was attorney general, had high praise. McCarthy tweeted:

I do not see how POTUS could have made a better choice than Bill Barr for AG. He is simply excellent – supremely qualified, confident, smart, steeped in the honorable traditions of DOJ, and an all around good guy. He can right the ship and navigate through the storms.

According to his biography on the website of the Kirkland & Ellis law firm, where he works in private practice, as attorney general Barr “set significant new enforcement policies in a wide range of areas, including financial institutions, civil rights, and antitrust merger guidelines.”

At the Department of Justice, [Barr] established innovative programs to combat violent crime and set significant new enforcement policies in a wide range of areas, including financial institutions, civil rights, and antitrust merger guidelines. He led the department’s response to the S&L crisis; oversaw the investigation of the Pan Am 103 bombing; directed the successful suppression of the Talladega prison uprising and hostage taking; and coordinated counter-terrorism activities during the first Gulf War.

Barr hasn’t directly criticized Mueller’s investigation of Russian meddling in the 2016 election. However, he has raised questions about Mueller’s vetting of prosecutorial staff.

Mainly, Barr has raised questions about why the staff includes so many donors to Democrat candidates, including Hillary Clinton.

“In my view, prosecutors who make political contributions are identifying fairly strongly with a political party,” Barr told The Washington Post for a story that ran in July 2017.

“I would have liked to see him have more balance on this group,” Barr said of Mueller.

Among the issues that Mueller is believed to be investigating is Trump’s firing of FBI Director James Comey in May 2017.

Shortly after the FBI director’s dismissal, in a Washington Post op-ed with the headline “Former attorney general: Trump made the right call on Comey,” Barr wrote:

Comey is an extraordinarily gifted man who has contributed much during his many years of public service. Unfortunately, beginning in July, when he announced the outcome of the FBI investigation into Hillary Clinton’s use of a private email server while secretary of state, he crossed a line that is fundamental to the allocation of authority in the Justice Department.

Barr told journalist Bob Woodward, in an interview for the 1999 book “Shadow: Five Presidents and the Legacy of Watergate,” that he considered removing Iran-Contra independent counsel Lawrence Walsh for “misconduct” in 1992.

He said he believed that Walsh was overtly political.

But, Barr told Woodward, he opted against removing Walsh.

5. The Clintons and Uranium One

Barr has said the Justice Department should investigate the Uranium One scandal, which involves both Bill and Hillary Clinton. He noted that he sees more evidence to warrant an investigation there compared with the suspicion of collusion between the Trump campaign and Russia.

“There is nothing inherently wrong about a president calling for an investigation,” Barr told The New York Times in November 2017, referring to Trump.

“Although an investigation shouldn’t be launched just because a president wants it, the ultimate question is whether the matter warrants investigation,” he said.

The Times reported: “Barr said he sees more basis for investigating the uranium deal than any supposed collusion between Mr. Trump and Russia.”

“To the extent it is not pursuing these matters,” Barr is quoted as saying about the Justice Department, “the department is abdicating its responsibility.”

The mining company Uranium One contributed $2.35 million to the Clinton Foundation during Hillary Clinton’s four-year tenure as secretary of state under Obama, The New York Times reported in 2015.

Figures associated with the company also paid $500,000 to former President Bill Clinton to speak in Moscow.

In a 2010 deal approved by a committee including Hillary Clinton and eight other members of Obama’s Cabinet, a Kremlin-connected entity obtained 20 percent of America’s uranium production by acquiring Canada-based Uranium One.

6. Bagpipes, the CIA, and More

Barr has been a bagpipe player since he was an 8-year-old boy, and he was a notable member of the City of Washington Pipe Band.

After leaving the Justice Department in 1993, Barr built a career in corporate law, serving as general counsel and executive vice president of Verizon Communications Inc. from 2000 to 2008.

He was general counsel for GTE Corp. from 1994 until 2000, helping to negotiate a merger of GTE and Bell Atlantic Corp. that produced Verizon Communications. He also argued before the U.S. Supreme Court and the European Commission.

After graduating from Columbia University, he went to work for the Central Intelligence Agency from 1973 to 1977. While at the CIA, he attended law school at George Washington University and was a clerk to Judge Malcolm Wilkey of the U.S. Court of Appeals for the District of Columbia.

Barr also served President Ronald Reagan from 1982 to 1983 as a member of the White House’s domestic policy staff.

Barr and his wife, Christine, were married in 1973. Their daughter, Mary Daly, works in the deputy attorney general’s office as the Justice Department’s point person on the opioid drug crisis.