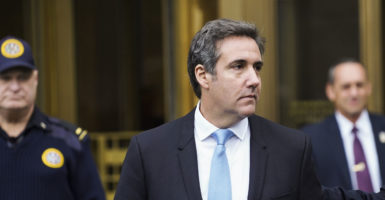 Amid the media hysteria over Michael Cohen’s guilty plea and discussions between the lawyers representing Paul Manafort and President Donald Trump, it’s important to understand from a legal standpoint what this means—and what it does not.

We don’t know what other evidence special counsel Robert Mueller may have that hasn’t yet been disclosed. But the evidence disclosed to date—including in Cohen’s plea deal—still doesn’t reveal any illegal conduct by Trump or his campaign or any collusion with the Russian government to change the outcome of the 2016 election. There is nothing illegal or unethical about discussions and sharing of information between lawyers representing individuals who may be the focus of the same prosecutor.

Cohen pleaded guilty to one count of lying to Congress. What was he lying about? For the past 30 years, the Trump real estate organization has been trying to negotiate a deal to build a marquee property in Moscow. There is certainly nothing unusual or untoward about that.

Cohen also stated that he never planned to travel to Russia for the hotel deal, nor did he ask Trump to travel there. He also swore to Congress that he had reached out to the press secretary for the Russian president, but that he did “not recall” whether he received a response. These statements were also false, thus constituting a federal crime of lying to Congress.

No one should minimize the seriousness of lying under oath to Congress. During the guilty plea before the district court judge, Cohen said, “I made these statements to be consistent with Individual-1’s political messaging and to be loyal to Individual 1.”

So Cohen lied to be loyal to Trump (Individual 1 presumably). But it’s important to understand that the underlying conduct that Cohen was lying about—negotiating a real estate deal—is not illegal or unlawful in and of itself, whether you’re working to get something built in New York City or Moscow.

Furthermore, there is no federal law that tells individuals who own a business and run for federal office, whether it is the presidency or Congress, that they have to stop running their business, negotiating deals, or taking part in the other myriad details involved in being a business owner the moment they decide to run for office.

Yes, they have to avoid conflicts of interest, and cannot enrich themselves unlawfully once in office. But those laws kick in after someone is elected.

All of Cohen’s entreaties to get the real estate deal appear to have been perfectly legal, at least so far as we know.

If we assume that Cohen pleaded guilty this time because he really did lie to Congress, then the underlying conduct—talking to Russian officials about a possible real estate deal in Moscow and briefing individuals within the Trump Organization—is all lawful conduct. Does Cohen secretly have some other testimony that shows illegal activity? We don’t know, and there is nothing in the plea agreement that indicates one way or another.

We also don’t know what Cohen told Mueller during his seven proffer sessions that took place between August 2018 and Nov. 20, 2018, as noted in the plea agreement. We do know that Trump submitted his written responses to Mueller on Nov. 20, and the Cohen guilty plea took place after that, leading one to conclude that Mueller was waiting for the president’s written answers before unveiling Cohen’s latest guilty plea. Where this leads is difficult to tell.

The media has also been full of stories claiming the special counsel is upset that the lawyers representing Manafort have apparently been briefing the lawyers representing Trump about their discussions with Mueller and implying that there is something nefarious in such sharing of information. There is nothing illegal or unethical about lawyers with different clients sharing such information.

The extensive, 17-page plea agreement that Manafort entered into with Mueller on Sept. 14 has no provision of any kind barring Manafort or his lawyers from briefing the president’s lawyers on their discussions with Mueller. There is an entire page and a half detailing the cooperation that Manafort has to provide to the special counsel, but nowhere does it say that Manafort is prohibited from sharing information about that cooperation.

In fact, Rudy Giuliani, Trump’s lawyer, says he has joint defense agreements with 32 potential witnesses in the special counsel’s investigation, including Manafort. Some legal experts say that agreement should have ended when Manafort pleaded guilty, but as long as Manafort’s lawyer is simply providing information to Giuliani and there is no effort to tamper with a witness or obstruct justice, there is no unlawful behavior in such sharing of information (although it is unusual).

Of course, Manafort, who was convicted for criminal violations of the law related to his consulting business that had nothing to do with his brief participation in the Trump campaign, has more serious problems.

On Nov. 26, Mueller filed a pleading with the federal court in the District of Columbia claiming that Manafort has breached his plea deal by “lying” to the FBI and the special counsel “on a variety of subject matters.” Those “subject matters” are not detailed in the filing; instead, the special counsel says he will outline what those “lies” are when he files a “detailed sentencing” report to the court.

So far, after a year and a half of the special counsel investigation, we’ve had multiple indictments of Russians for trying—with no coordination with any Americans—to use social media and the internet to encourage social unrest in America in 2016. We had various indictments for criminal activity unrelated to the Trump campaign and for lying to Congress and federal investigators over conduct that was itself lawful.

But we still have had no indictments that have revealed any evidence about the issue the special counsel was supposed to investigate—whether there was any collusion between the Trump campaign and the Russian government. The latest developments with Cohen and Manafort add very little to answering that ultimate question. We’re still waiting.