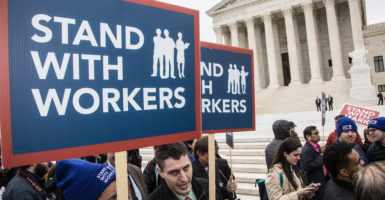 Demonstrators share their message outside as the Supreme Court hears arguments Feb. 26 in the Janus case. The high court's ruling dealt a severe blow to unions nationwide. (Photo: Jeff Malet/Newscom)

Labor unions are collecting dues from public employees without their “affirmative consent” in defiance of a Supreme Court ruling that state laws requiring nonunion government workers to make such payments are unconstitutional, a new lawsuit alleges.

The Freedom Foundation, a free market think tank based in Washington state, joined with the National Right to Work Legal Defense Foundation to sue on behalf of 10 government employees in Oregon who argue that union dues or fees should not be deducted from their paychecks after they officially resigned from their union.

“This is one of the biggest scandals I’ve ever witnessed from the unions and the government,” Aaron Withe, director of Freedom Foundation’s Oregon chapter, said in a press release. “The union dues they’ve forcibly deducted from people who want out are meant to be designated to the working families of this state, not some special interest group.”

The lawsuit, filed Nov. 20, names as defendants Local 503 of the Service Employees International Union and Council 75 of the American Federation of State, County and Municipal Employees, as well as several  government agencies.

“Compelling individuals to mouth support for views they find objectionable violates that cardinal constitutional command, and in most contexts, any such effort would be universally condemned,” wrote Justice Samuel Alito, author of the court’s opinion.

The Supreme Court ruling overturned its 1977 decision that said public-sector employees may be required to pay “fair share” fees, also known as agency fees, if they decline to join a union.

The Janus ruling affects about 5 million government employees in 22 states who no longer are required either to join a union or pay related fees as a condition of employment.

Mark Janus, a child support specialist in the Illinois Department of Healthcare and Family Services, was lead plaintiff in the Supreme Court case.

The Oregon employees are asking a district court to impose an injunction preventing state government officials from deducting union dues or fees from the paychecks of government workers who resigned from the union after the high court’s Janus ruling.

They also are asking the court to order SEIU and AFSCME to refund, with interest, the deductions made from their wages after they submitted their resignations.

The Janus decision “thankfully puts the burden of proof on the union to prove a worker actually wants to be a dues-paying member,” Withe said, adding:

For years, unions used illegal agency fees to bully workers into becoming members. Someone forced to decide between union membership and an illegal penalty like an agency fee cannot ‘voluntarily’ decide to become a union member, nor can the workers be bullied into waiving rights they don’t realize they have because they have not yet been acknowledged by courts.

Although the Oregon unions accepted the employees’ resignation letters, the unions did not honor the employees’ request to revoke their authorizations for collection of dues or fees made prior to the Janus ruling, according to the suit.

The Daily Signal was unable to obtain comment on the lawsuit from SEIU, AFSCME, or the Oregon state government by publication deadline.

An Oct. 8 response from SEIU Local 503 to an employee who sued acknowledges the employee’s desire to resign and appears typical of the responses received by workers.

We also wish to remind you that, under the terms of the dues checkoff authorization form you signed, dues deductions cannot be terminated except in the periods set forth in the authorization. … Accordingly, we shall hold the cancellation request on file until the first date cancellation would be appropriate. In your case, that date is August 19. At that point, the union will take appropriate steps to have your dues checkoff cancelled.

The language of the Supreme Court’s Janus ruling, however, makes it clear that public employees must explicitly waive their First Amendment rights before any dues or fees may be deducted from their paychecks, the plaintiffs’ attorneys argue in the lawsuit.

The unions should not be permitted to use membership cards signed prior to the Janus ruling to keep employees locked into paying dues or fees against their will, the lawsuit says.

The Oregon lawsuit is nearly identical to a suit the Freedom Foundation filed on behalf of Washington state government employees in August challenging the constitutionality of union membership forms.