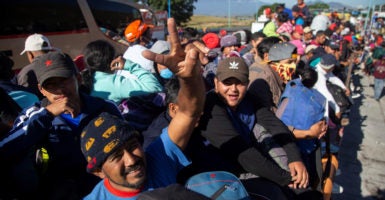 Migrants on their way to the U.S. from Central America travel Nov. 20 through the Mexican state of Jalisco. (Photo: Francisco Guasco/EFE/Newscom)

Advocates of open borders quoted in media coverage of the migrant “caravan” moving north through Mexico are part of a network of U.S.-based groups funded in the past by left-leaning foundations, according to tax and financial records.

Pueblo Sin Fronteras, a Chicago-based nonprofit whose name means People Without Borders, is widely credited with organizing the caravans of migrants that traveled from Central America on trains and buses and on foot this year and last.

Two United Methodist churches in Chicago appear to be bases for People Without Borders, which is led by one of the pastors, documents show.

Capital Research Center, a Washington-based nonprofit that examines how foundations and charities spend money, analyzed tax and financial records related to People Without Borders. The Daily Signal reviewed this analysis and related documents and websites.

Information on the website and Facebook page of People Without Borders indicates that the advocacy group played a key role for at least the past decade in forming caravans that typically got started in Honduras or El Salvador before entering Guatemala to the north.

In April, a few hundred migrants traveled north together with support from People Without Borders, but they largely disbanded in Mexico City.

The latest caravan, which originated in Honduras in October before crossing into Guatemala and breaking through barriers to enter Mexico illegally, has ranged in size from a few hundred at its inception to several thousand. Twitter feeds from reporters covering the caravan in person estimated it was about 2 miles long.

When the caravan first arrived in Mexico, U.N. officials estimated roughly 7,000 migrants were heading north. A few days ago, many left Mexico City.

Media reports estimated that 4,000 to 5,000 migrants are heading toward the U.S.-Mexico border. In mid-November, dozens of migrants began arriving by bus near the U.S. border in Tijuana, some climbing the fencing. In the days since, hundreds of migrants have overwhelmed that city’s resources.

People Without Borders has avoided claiming a leadership role in the caravans, but its Facebook posts make clear that the group was coordinating logistical and financial support for migrants attempting to reach the U.S.

A woman at Chicago’s Lincoln United Methodist Church who identified herself as Cecilia Garcia told The Daily Signal in a phone interview that two different but allied groups are called People Without Borders, one domestic and based in Chicago and the other international.

“Our group has nothing to do with the caravan, but we are very supportive of the migrants,” Garcia said.

People Without Borders lists a “Caravan Support Fund” on Facebook. Several members have been quoted in both the American and Mexican press while traveling with the caravan.

They include Denis Omar Contreras, described in an Associated Press report as “a Honduran-born caravan leader.” Contreras has been quoted widely disputing allegations from President Donald Trump and other U.S. leaders who say the caravan may harbor terrorists and criminals.

Another activist with People Without Borders, Irineo Mujica, is quoted in the same story insisting that the caravan is a benign movement of people fleeing from violence and dire economic conditions in Central America.

Mujica, a Phoenix resident who is a dual citizen of Mexico and the U.S., is director of People Without Borders in Mexico. Last month, Mexican officials arrested Mujica in Ciudad Hidalgo, a town in the southern part of the country. He was accused of property damage and resisting arrest, according to media reports.

Ludwig, the research analyst at Capital Research Center, has kept tabs on People Without Borders, its network of activists, and its relationship with the caravans of migrants. (The Contreras surname, Ludwig notes, sometimes is spelled Contera in media reports, such as one in the Los Angeles Times.)

Other open-borders activists affiliated with People Without Borders and participating in the caravan include Rodrigo Abeja, who has been quoted by NBC News, USA Today, The Washington Post, and other news outlets. In statements to the media, Abeja joined other activists in denying that gang members or terrorists have infiltrated the caravan.

The Daily Signal sought comment from Alex Mensing, listed as a U.S. contact for People Without Borders. At publication time, Mensing had not responded.

In a voicemail, The Daily Signal asked Mensing how the group could say it has no organizational role, since several of its activists are taking part, as well as how open-borders advocates could be certain that criminal elements are not included in the caravans.

Pueblo Sin Fronteras, or People Without Borders, is an extension of another nonprofit advocacy group called La Familia Latina Unida, or the United Latin Family, which advocates on behalf of illegal aliens, according to Influence Watch, a recent project of the Capital Research Center.

Tax records and other public documents show the organizations share the same Chicago address and some staff members. That address, 2176 W. Division St. in Chicago, also is the address of the 13-year-old Adalberto Memorial United Methodist Church.

In 2006, the church provided sanctuary for a year to an illegal immigrant. She was arrested when she left the church and reportedly continues to advocate from Mexico for changes to U.S. immigration law.

Ludwig’s research shows that United Latin Family lost its tax-exempt status in May 2017 after declining to file 990 tax forms.

Here is how Influence Watch describes the connection:

Emma Lozano, a left-wing activist and pastor at the Lincoln United Methodist Church in Chicago, Illinois, is listed as executive director of Pueblo Sin Fronteras [People Without Borders]. Lozano is also president and founder of the Centro Sin Fronteras.

She is the sister of the late Rudy Lozano, a left-wing activist and community organizer in Chicago, Illinois. [Emma] Lozano is also a pastor at the Lincoln United Methodist Church in Chicago, along with her husband, the pastor Walter ‘Slim’ Coleman.

The Daily Signal requested an interview with Emma Lozano, the pastor, but has received no response.

Records compiled by Influence Watch show that between 2000 and 2005, Center Without Borders received $113,000 in grants from the Washington-based Public Welfare Foundation and the Chicago-based Wieboldt Foundation. The Washington-based National Immigration Forum donated $60,000 in 2010.

‘A Lot of Confusion’

People Without Borders worked with a coalition, including four groups that support permissive immigration policies, to organize the caravan that took shape in April, according to Influence Watch.

The Daily Signal requested an interview with Lozano, the Chicago pastor identified as executive director of Pueblo Sin Fronteras, or People Without Borders, but has received no response.

The website and Facebook page for People Without Borders don’t appear to mention two different groups of that name, but show the organization has a presence in Mexico.

But Garcia, who said she is a member of Lincoln United Methodist, told The Daily Signal that two groups “have the same name, but they were founded at different times.”

“There is certainly a lot of confusion out there, because both organizations have the same name, but they were founded at different times,”  she said, adding:

Both groups work together a lot and we cooperate and share social media. They also asked us to share a GoFundMe page. We are told that the caravan developed organically, and that there is no single leader.

People are migrating because there was a lot of U.S. meddling in Central America and now they are fleeing those countries. We support family reunification.

Garcia, who called herself the founder of an organization called Family Reunification Not Deportation, also said she belongs to both United Latin Family and People Without Borders.

Garcia said her own husband was “abducted by ICE,” referring to U.S. Immigration and Customs Enforcement, and is now in Mexico.

Ludwig said Chicago-based groups that Influence Watch describes as “illegal immigration advocacy organizations” appear to be interconnected because they share resources and personnel.

“The Pueblo Sin Fronteras I identified appears to be a project of the U.S.-based 501(c)(3) Centro Sin Fronteras and the 501(c)(4) La Familia Latina Unida, since they’re consistently connected on various websites and they have overlapping people, most notably Emma Lozano,” Ludwig said in an email to The Daily Signal.

The Influence Watch entry for Center without Borders lists the group’s tax identification number and identifies United Latin Family and People Without Borders as affiliated organizations.

The Daily Signal sought comment from Center Without Borders and the United Latin Family at a listed phone number and email address, but has not received a direct response from anyone speaking on behalf of those groups.

“For now we’re treating Pueblo [People Without Borders] as a project [of Center Without Borders] until I get further notice that there’s a foreign group which can take credit for it,” Ludwig said. “Even then, the U.S. Pueblo operates in conjunction with the Centro and La Familia groups, so it’s fair to list them all together.”