Why Tissue From Abortions Isn’t Needed to Save Other Lives 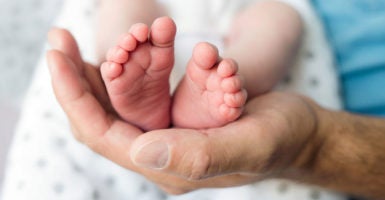 Even ordinary skin cells can be used to replace the need for fetal tissue in research, pro-life scholar Tara Sander Lee says during a Heritage Foundation event. (Photo: Halfpoint/Getty Images)

Fetal tissue obtained during abortions that scientists say is necessary for research can be replaced with other samples to reconcile good science with life-affirming practices, bioethics experts argue.

“Why are people so interested in obtaining these tissues, when there are so many ethical alternatives?” Tara Sander Lee, an associate scholar at the pro-life Charlotte Lozier Institute, asked during a recent event at The Heritage Foundation focused on fetal tissue research.

“It is absolutely clear that the human body is amazing and has a lot of tissues and organs that are available right now from both adult and pediatric populations that can be donated and discarded, and they can come from living individuals as well as even postmortem,” Lee said.

Ethical alternatives to fetal tissue research and use of fetal tissue in medical treatment, she said, include the placenta, umbilical blood, and amniotic fluid, all of which contain precious resources that normally are discarded after a birth.

“Researchers are understanding that these contain valuable stem cells that can be used for research and are being used to treat patients now and save their lives,” Lee said.

>>> Related: 5 Takeaways From a Discussion of Alternatives to Fetal Tissue Research

Lee, also a teacher, has a doctorate in biochemistry from the Medical College of Wisconsin and completed research fellowship training at Harvard Medical School and Boston Children’s Hospital.

“In terms of actual fetal tissue research, it was allowed very early on. But then President [Ronald] Reagan put in a moratorium in 1988 in terms of federal funding of research involving fetal tissue from induced abortion,” Prentice, who has a doctorate in biochemistry from the University of Kansas, said.

Prentice also is an adjunct professor of molecular genetics at Catholic University’s John Paul II Institute for Studies on Marriage and Family and is on the advisory board for the Midwest Stem Cell Therapy Center, a research center in Kansas that he helped create.

Lee said despite claims that tissue procured from abortions is not sold to researchers to make a profit, evidence suggests otherwise.

A report in September from the pro-life Center for Medical Progress concluded that Advanced Bioscience Resources has “played middle-man for tens of millions of dollars in transactions over freshly aborted baby body parts since its founding in 1989.”

“They consider that a service fee,” Lee said of the company. “But in addition to that, they also charged additional charges for shipping, to be screened, and also freezing. So it’s not just that. There was much more money that was transferred in addition to just that service fee that they claim.”

The Daily Signal requested comment from Advanced Bioscience Resources, but did not receive a response by publication deadline.

Heritage Foundation researcher Melanie Israel has noted a 2016 report by the Senate Judiciary Committee that found several tissue procurement companies—including Advanced Bioscience Resources—“paid Planned Parenthood Federation of America to acquire aborted fetuses, and then sold the fetal tissue to their respective customers at substantially higher prices than their documented costs.”

Lee showed the Heritage audience a photo of a tissue acquisition invoice for a transaction, detailing that the company resold two eyes from an aborted baby for $650.

“So the real question is, is this a service fee or was there profit being made?” Lee asked, adding:

What I’m showing you is that they [Advanced Bioscience Resources] determined prices that they wanted to charge depending on how old the fetus was.

If this is truly just a simple service fee, why did those numbers increase over the years?

Even ordinary skin cells can be used to replace the need for fetal tissue, Lee said.

“Any individual can donate just a small, little biopsy of skin, and from that you can program the cells from that skin to actually go back and become more like an embryonic-like phenotype,” she said.

A phenotype refers to “observable traits that manifest from the organism’s genetic blueprint, whether it’s on a microscopic, metabolic level, or a visible or behavioral level,” according to the website Sciencing.

Lee said ethics need to be the priority in working to end research using fetal tissue and substitute other resources such as umbilical cord blood and amniotic fluid.

This report has been updated to reflect the rescheduling of the congressional hearing from Dec. 6 to Dec. 13 because of the death of former President George H.W. Bush.