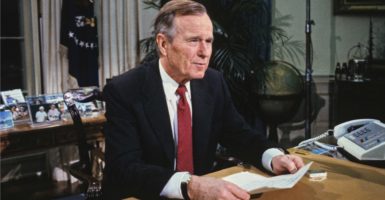 President George H.W. Bush concludes an address to the nation from the Oval Office on Christmas Day 1991, when he announced the resignation of Soviet President Mikhail Gorbachev, marking the collapse of the Soviet Union and the end of the Cold War. (Photo: CNP/AdMedia/SIPA/Newscom)

George H.W. Bush joined the Navy on his 18th birthday and flew 58 combat missions in World War II, going on to win several honors, including a Distinguished Flying Cross and a Presidential Unit Citation.

Fair winds and following seas, Sir. We have the watch. pic.twitter.com/GdGoBmvKKx

George P. Bush, Texas land commissioner and grandson of the 41st president, noted his grandfather’s military service in a tribute:

My grandfather was the greatest man I ever knew. His life spanned the American Century—he fought in World War II … took part in the Texas oil boom … served out a distinguished career in public service including serving as president during the final days of the Cold War. pic.twitter.com/6i68EPVC3j

President Donald Trump and first lady Melania Trump said in a statement that George Herbert Walker Bush “always found a way to set the bar higher,” and noted: “As a young man, he captained the Yale baseball team, and then went on to serve as the youngest aviator in the United States Navy during the Second World War.”

President George H.W. Bush led a long, successful and beautiful life. Whenever I was with him I saw his absolute joy for life and true pride in his family. His accomplishments were great from beginning to end. He was a truly wonderful man and will be missed by all!

Bush was the last of eight presidents to be a member of Veterans of Foreign Wars, the organization noted Saturday.

“President Bush was highly admired within the veteran community and beyond,” VFW National Commander B.J. Lawrence said in a statement.

After eight years as Ronald Reagan’s vice president, Bush served as president from 1989 to 1993. He led the United States into the first conflict with Iraq, a mission known as Desert Storm.

He served as a Navy fighter pilot in the World War II Pacific theater, as a U.S. congressman, U.S. ambassador [to China and the United Nations], as CIA director, then vice president to President Ronald Reagan for eight years before being elected president, where he would win a resounding war against Iraq and end the Cold War. …

On behalf of the entire 1.6 million-member VFW family, our deepest condolences go out to the entire Bush family, and [we] thank them for their strength and support that enabled him to continue serving our great nation for so long. Bravo Zulu.

“President George Herbert Walker Bush, naval aviator, decorated in his youth for valor in combat, took his experience in war to build a better world as our commander in chief,” Mattis said.

“His service to our nation demonstrated how we as a people can draw on our humility, diversity, and devotion to our country to meet every challenge with fortitude and confidence,” Mattis continued. “We will miss him, but at the going down of the day, his example will long guide our sailors, soldiers, airmen, and Marines for how to live life without regret.”

Bush experienced several close calls as a pilot fighting the Japanese in the Pacific during World War II.

Most notably, the Japanese shot down his plane on Sept. 2, 1944, over the island of Chichi Jima. Bush still managed to release his bombs and head back to the aircraft carrier before he bailed out. He floated on a raft for hours before he was picked up by a submarine.

In June 1944, Bush had to make a crash landing on the water after a bombing run. A U.S. destroyer crew rescued him.

“The American Legion is saddened by the passing of a great Legionnaire, former President George H.W. Bush,” American Legion National Commander Brett P. Reistad said in a statement Saturday. “His stoic leadership during the Gulf War was admired by not just the troops that he led, but by world leaders around the globe.”

As a young man he served heroically in World War II. It marked the beginning of an entire lifetime dedicated to public service. He inspired Americans to give back to their communities with his ‘Thousand Points of Light’ program.

The American Legion was proud to present our highest award, the Distinguished Service Medal, to President Bush in 1991. We extend our heartfelt condolences to the Bush family and his many friends.

“George H.W. Bush will be remembered for his astonishing accomplishments and his unremitting patriotism,” Kay Coles James, president of The Heritage Foundation, said in a public statement. “He displayed amazing courage as a young pilot who was shot down in World War II. That dauntless spirit never diminished, as shown by the way he chose to celebrate his 75th, 80th, 85th, and 90th birthdays: by skydiving.”

James, an assistant secretary of health and human services under Bush, added:

President Bush is one of my American heroes. He was an unrivaled public servant, a humanitarian, and faithful family man. As someone who had the honor of serving in his administration, and calling him a friend, I know that history will remember 41 well. President Bush was ever willing to disregard personal gain to pursue a public calling—and few did so with his grace and dignity.

Of the remaining living presidents, only two had any military service, but neither were in combat.

Jimmy Carter, president from 1977 to 1981, entered the Naval Academy in Annapolis in 1943 and graduated in 1946, after World War II had ended. Carter served in the Navy on active duty until 1953 and in the Navy Reserves until 1961, reaching the rank of lieutenant.