The Supreme Court Signals It May Rein in Abusive Property Seizures 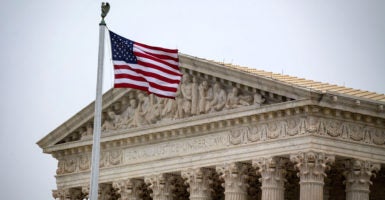 The U.S. Supreme Court heard oral argument in a case that may rein in abusive property seizures by state and local governments through the highly controversial legal tool known as civil asset forfeiture. (Photo: Alexander Drago/Reuters/Newscom)

This week, the U.S. Supreme Court heard oral argument in a case that may rein in abusive property seizures by state and local governments through the highly controversial legal tool known as civil asset forfeiture.

The case at issue involves a man named Tyson Timbs, who sold $225 worth of heroin to undercover police officers on two occasions, as a means of raising money to support his own drug habit. Police arrested Timbs while he was driving to a third drug deal, and he ultimately pleaded guilty.

He was sentenced to a year of home confinement and five years of probation, and assessed roughly $1,200 in court costs and fees. Then the state of Indiana moved to forfeit the vehicle he was driving that day: a $42,000 Land Rover, which Timbs purchased with funds from his father’s life insurance policy.

Civil forfeiture is the law enforcement practice that allows police to seize currency or property alleged to have been used to commit a crime, or to represent the fruits of that crime.

This type of proceeding is known as a civil in rem forfeiture, meaning the defendant is the property itself, and the state does not need to pursue criminal charges or win convictions to permanently strip owners of their homes, cars, or life savings.

In the United States, civil forfeiture was largely relegated to admiralty and customs law until the 1980s, when Congress and the states expanded its reach to permit its use against drug kingpins, money launderers, and organized crime.

But federal and most state laws permitted agencies to keep some or all of the proceeds of their seizures, and afforded property owners so few due process protections that the government can successfully win a forfeiture case even when it has little or no evidence of criminal behavior.

This was clearly not the case for Timbs, but seizing a $42,000 car as an instrumentality in a minor drug offense, the maximum criminal fine for which was $10,000, raised an important question: Was the seizure of Timbs’ car unconstitutional under the Excessive Fines Clause of the Eighth Amendment?

Both the trial court and an appeals court held that it was, but the Indiana Supreme Court ruled that the U.S. Supreme Court has never explicitly held that the clause applied to the states, a process known as incorporation.

Most people would probably be surprised to learn that not all of the guarantees in the Bill of Rights apply against state governments.

Though the Supreme Court made it clear in Barron v. Baltimore (1833) that these rights only restricted the federal government, starting in the 1920s, the court began incorporating provisions of the Bill of Rights against state governments through the Due Process Clause of the 14th Amendment.

Today, neither states nor the federal government may abridge free speech, establish official religions, engage in unreasonable searches or seizures, or take property without just compensation.

The Eighth Amendment provides that “[e]xcessive bail shall not be required, nor excessive fines imposed, nor cruel and unusual punishment inflicted.”

While the Supreme Court has ruled that the prohibitions on excessive bail and cruel and unusual punishment apply against the states in Schilb v. Kuebel (1971) and Robinson v. California (1962), the court has indeed never held that the Excessive Fines Clause applies to the states as well.

After this week’s argument, that appears likely to change. At oral argument, the justices appeared to uniformly consider the question of incorporation to be settled.

When the lawyer for Indiana, Solicitor General Thomas Fisher, stood up at the podium, Justice Neil Gorsuch said, “We all agree that the Excessive Fines Clause is incorporated against the states … can we at least get the theoretical question off the table?”

Justice Brett Kavanaugh chimed in, “Isn’t it just too late in the day to argue that any of the Bill of Rights is not incorporated?”

Fisher was not prepared to concede the point, responding that the court “has never incorporated a right against the states where it could not conclude that there was a relationship that was fundamental or … deeply rooted in our history and tradition.” He asserted that applying constitutional protections against property seizures would be a novel and historically unsupported move.

Instead, he argued that the court should overrule its own precedent from a 25-year-old case, Austin v. United States (1993).

Later, in United States v. Bajakajian (1998), the court clarified the test of excessiveness in the forfeiture context when it declared the forfeiture of a large amount of currency to be unconstitutional on the basis that it was “grossly disproportional to the gravity of [the] offense.”

The justices did not seem interested in reversing course. When Justice Stephen Breyer asked Fisher whether, under his theory, “a state needing revenue” could forfeit every vehicle found merely to be speeding, Fisher responded, “Yes.”

Several justices seemed perturbed by the implication that states and localities would be able to levy otherwise unconstitutional fines merely by saying they are forfeitures.

Many law enforcement agencies already treat forfeiture as an easy means of seizing their way to bigger budgets. Each year, hundreds of millions of dollars in cash and property are forfeited and the revenues subsequently spent with little oversight or accountability.

Timbs’ attorney, Wesley Hottot of the public interest law firm the Institute for Justice, picked up on this, arguing that exempting forfeitures from the Excessive Fines Clause would permit “governments at all levels to impose constitutionally excessive civil in rem forfeitures based on nothing more than a label.”

But while there seemed to be broad support for incorporating the Excessive Fines Clause, and possibly for holding that the clause does indeed apply to civil forfeitures that are punitive in nature, there was no clear agreement about how to define an “excessive” civil forfeiture.

Justice Samuel Alito wanted to know if the civil forfeiture of a $1,500 Kia and a $250,000 Bugatti should be treated the same under the Excessive Fines Clause.

Hottot responded that forfeiture of any vehicle in this case is excessive because the “vehicle was not instrumental to this crime. It was incidental.”

Chief Justice John Roberts pointed out that the Land Rover was clearly “an instrumentality of the crime” and that “it’s pretty well established” that instrumentalities “can be forfeited.”

Hottot countered that, while true, it could nevertheless be excessive based on, for example, the burden its seizure placed on a property owner—particularly an “innocent owner” who was neither aware of, nor consented to, the misuse of his property.

Such seizures are a real and often tragic phenomenon. For example, the city of Philadelphia attempted to seize the home of Chris and Markela Sourovelis because their son, unbeknownst to them, had sold $40 worth of drugs on the property.

Later in the argument, Justice Elena Kagan said that it “seems as though there are two questions”—whether to incorporate the right, and what “is the scope of the right to be incorporated.”

The Timbs case only asks the first question, and the court can—and likely will—hold that the Eighth Amendment’s protections against excessive fines are incorporated against the state, leaving the more complicated question of how to define an “excessive” civil forfeiture to another day.

If it does, the court will have delivered a significant victory for the property and due process rights of millions of Americans.