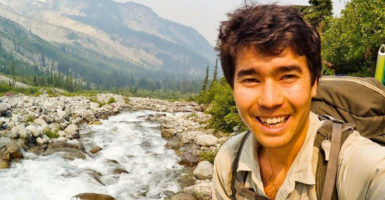 “This is not a pointless thing,” wrote Christian missionary John Allen Chau in a letter to his parents before he died. “The eternal lives of this tribe is at hand and I can’t wait to see them around the throne of God worshipping in their own language, as Revelations 7:9-10 states.” (Photo: Social media/Reuters/Newscom)

Those words, chanted by Stanford students in a march led by the Rev. Jesse Jackson in 1987, seem to have won the day, based on the reactions generated by the death of Christian missionary John Allen Chau.

Chau, who died during an attempt to evangelize a remote island where people have had virtually no contact with modern culture, has been covered almost snidely at times.

“‘He lost his mind’: Slain missionary John Allen Chau planned for years to convert remote tribe,” was the headline of one Washington Post story.

But he’s also become the news hook for pundits to make their case against any missionary efforts, religious or otherwise, to any people who have largely evaded modernity.

Chau “should have stayed away,” wrote the Chicago Tribune’s John Kass. “There should be some places left on Earth where people can live in their natural state, away from all of us and all our pride and our holy men.”

Ed Simon wrote in The Washington Post: “Chau’s death should remind us that there are reasons some groups don’t want to be contacted, and we should be content with their decision.”

Like centuries of self-aggrandizing missionaries before him, Chau saw himself as a humble servant of God. He sought to use his waterproof Bible to compel those he viewed as savages from their perceived godlessness. … This is piety weaponized into a tool of domination and supremacy, meant to crush nonconforming cultures. It’s what white Europeans did to indigenous people and enslaved people to tame and control them.

But are we really serving the people of North Sentinel Island, who shot at Chau with arrows before presumably killing him on a later date, by abandoning them?

Contra our gauzy modern mindset, fueled by Rousseau’s fantasies of the noble savage, more primitive lifestyles are hardly likely to be exemplars of the good life.

Ancient Germans and Britons were cannibals, and in Carthage, infants were sacrificed. (Memo to the Globe’s Graham: White Europeans were conquered and civilized, too.) More recently, evidence of tribes in Papua New Guinea, in Indonesia indicates the practice of cannibalism.

This is not to say the North Sentinelese have such practices—frankly, they might be far more civilized than CNN, which aired a host eating a human brain in 2017—or anything similar.

But from some of the comments surrounding Chau, who was 26, you’d think our current world has nothing to offer.

Let’s do a thought experiment. What if Planned Parenthood had sent an abortionist to help any women who don’t want to keep their pregnancies? What if a doctor had come in to do gender-transitioning surgeries on anyone who believed he was stuck in the wrong body? What if the Human Rights Campaign marched in to celebrate the first same-sex relationship or wedding?

Would those people—if they had shared Chau’s fate—have been judged in the same way? Or would they be seen as heroes for attempting to share the enlightenment of our modern era with people who had remained ignorant?

Because let’s face it, for all their talk against colonialism, today’s left has never been great at the live-and-let-live attitude. Instead, they’ve regularly pushed their agenda in schools, in red states, and through the courts and a host of other aggressive stratagems.

And it’s not only domestically: In a recent podcast interview with The Daily Signal, Obianuju Ekeocha, president of Culture of Life Africa, detailed how pro-abortion policies are foisted on Third World nations.

Underneath all the left’s chatter about cultural relativity and celebration of diversity is a firm, unwavering belief in the superiority of certain beliefs.

At the end of the day, Chau’s greatest sin is holding beliefs unfashionable in our modern, secular world.

I don’t know whether Chau made all the right calls. He does appear to have taken serious precautions to be immunized and thus avoid putting the North Sentinelese at very real risk. But perhaps he could have done more, or even, as absurd as it seems, done something like tried to stay in a boat and make contact by shouting ashore rather than forcing closer physical proximity.

Nonetheless, whether he chose the wisest course or not, he certainly applied serious thought and preparation to his mission: Chau “spent years training in linguistics, as an EMT and studying anthropology ahead,” reported USA Today, citing All Nations, a missionary group that worked with Chau.

Nor was it an impulsive decision. The director of All Nations, Mary Ho, told Christianity Today that Chau had been planning this for eight years, since he was 18, per a blog post from Boyce College professor Denny Burk.

I recently talked casually to a missionary who had spent time in Indonesia, whose name I’m not going to use because our conversation certainly wasn’t on the record. He recounted how Christianity had changed lives for certain Indonesians.

Previously, he said, tribes would do things like plant a tree after being insulted by another tribe, wait for the tree to become mature in a decade or two, and then decide, looking at the tree, it was now time for the long-simmering revenge to be enacted on that other tribe. And women weren’t treated great, either.

With the coming of Christianity, these tribes were able to live in a better, more forgiving, more equal way. Is that really so bad?

Christianity played a key role in the development of Western civilization, in the creation of a perspective that, while never perfect, has gradually pushed the world toward upholding a universal human dignity aligned with St. Paul’s words: “There is neither Jew nor Gentile, neither slave nor free, nor is there male and female, for you are all one in Christ Jesus.”

According to The Washington Post’s reporting on his journal, Chau, confronted by men with bows and arrows, shouted, “My name is John, I love you and Jesus loves you.”

He tried bringing gifts; he sang hymns when a tribe member shouted at him and another one shot an arrow at his waterproof Bible.

“You guys might think I’m crazy in all this, but I think it’s worth it to declare Jesus to these people,” Chau told his parents in a letter shortly before his death, according to The Guardian.

“This is not a pointless thing,” he added. “The eternal lives of this tribe is at hand and I can’t wait to see them around the throne of God worshipping in their own language, as Revelation 7:9-10 states.”

That’s hardly the language of a young imperialist, convinced he has nothing to learn or cherish in the North Sentinelese culture.

And it’s hard not to think that our culture wouldn’t be better if we had more “crazy” people who “lost their minds” like John Allen Chau.