Federal Employees Ordered Not to Discuss the ‘Resistance’ on Work Time 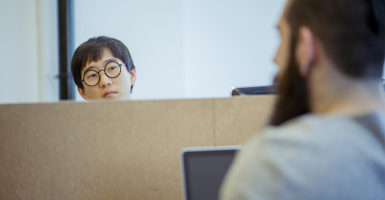 Federal employees were warned this week not to talk about the "resistance" or the president’s possible impeachment on the job. (Photo: Frédéric Cirou/F. Cirou / Altopress/Newscom)

Federal employees received warning on Wednesday not to discuss the “resistance” or the impeachment of President Donald Trump while on the job under new guidance issued by the Office of Special Counsel, the independent agency that enforces the Hatch Act.

The guidance, according to The New York Times, informed the federal workforce that engaging in discussions of the impeachment of the sitting president or “resistance” to the Trump administration on work time could constitute as political activity banned under the Hatch Act, a law prohibiting federal employees from participating in such activity in an official capacity or on government time.

The Times reports that the reasoning behind the guidance stems from the fact that Trump’s 2020 presidential campaign is already under way, and that arguments in favor or opposition to Trump’s policies or possible impeachment are political statements that either promote or oppose the president’s re-election campaign.

“We understand that the ‘resistance’ and ‘#resist’ originally gained prominence shortly after President Trump’s election in 2016 and generally related to efforts to oppose administration policies,” the newspaper reported from the guidance. “However, ‘resistance,’ ‘#resist’ and similar terms have become inextricably linked with the electoral success (or failure) of the president.”

Though Ana Galindo-Marrone, the chief of the Office of Special Counsel’s Hatch Act unit, told the Times that the guidance fits with past interpretations of the law, she explained the office is in a unique position under Trump. The two presidents who previously faced impeachment—Richard Nixon and Bill Clinton—were already in their second terms and therefore unable to run for re-election, whereas Trump is only in his first.

Advocates of public integrity have characterized the new guidance as agency overreach.

American Oversight, an ethics watchdog nonprofit that bills itself as “the top Freedom of Information Act litigator investigating the Trump administration,” sent a public letter to the Office of the Special Counsel on Thursday advocating the agency to rescind the new guidance because the instructions are too broad and violate First Amendment protections.

“OSC’s position on impeachment advocacy or opinions goes too far,” wrote Austin Evers, the organization’s executive director. “While the Hatch Act is an important safeguard against partisan political bias in the government, certainly there is a difference between advocating that an official should (or should not) be elected and advocating that an official did (or did not) commit treason or high crimes and misdemeanors under the Constitution.”

Hans von Spakovsky, a senior legal fellow at The Heritage Foundation who specializes in election law, disagreed with Evers’ position and defended the guidance as correctly following the rules established in the Hatch Act.

“I don’t believe the new admonition is too broad,” von Spakovsky wrote in an email to The Daily Signal, adding:

Under the Hatch Act, federal employees can discuss policy issues and current events. But they can’t engage in political activity, which is activity geared towards helping a particular candidate or political party. So while it is OK, as an example, to say that you don’t believe that Obamacare should be repealed, it is not OK (and a potential violation of the Hatch Act) to tell other federal employees they should vote against Trump or vote against other Republican candidates in order to ensure Obamacare is not repealed. Soliciting other employees to resist President Trump and his policies would constitute similar partisan political activity.

The Office of Special Counsel is charged with investigating possible violations of the Hatch Act by federal employees and by state and local employees paid from federal grants.

The office has no relation with special counsel Robert Mueller, assigned by the Justice Department to investigate whether the Trump campaign had any ties to Russia leading up to the 2016 presidential election.