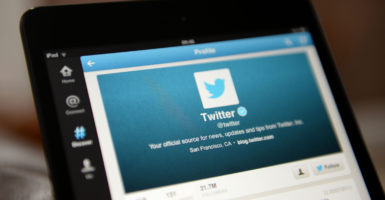 Twitter is now changing its tune on Jesse Kelly’s account, initially indicating that it would not accept appeals to restore his access to the platform. (Photo: Andrew Matthews/ZUMA Press/Newscom)

Iraq War veteran Kelly, 37, said that before Twitter suspended his account on Sunday, he was consciously attempting to avoid violating its rules.

“The truth is, I understand how sensitive Twitter is. I understand that they are run by leftists, and they’re trying to run off people on the right, so knowing that, I’m fairly careful with it,” Kelly told Hill.TV’s Buck Sexton.

“Especially because it was a big tool I used to promote my show, to promote things that I had written,” he said. “So I wasn’t trying to get kicked off, I was trying to be good, and I got kicked off anyway.”

Kelly, who ran two unsuccessful campaigns for Congress in Arizona in 2010 and 2012, shared a message he received from Twitter Support with author Sean Parnell upon Kelly’s suspension, which claimed his account had been permanently suspended “due to multiple or repeat violations of the rules.” The message indicated that Twitter would not restore his account or consider any appeals:

.@JesseKellyDC just shared this with me.

He’s permanently banned with no explanation. He broke no rules.

This madness has to stop. pic.twitter.com/zvwgSLg1Ri

“When we permanently suspend an account, we notify people that they have been suspended for abuse violations, and explain which policy or policies they have violated and which content was in violation,” Twitter says on its “range of enforcement options” webpage.

Hawley, 38, called on Congress Tuesday to launch an investigation of Twitter concerning the incident, implying Twitter was discriminating against conservative commentators in its bans, and questioning the company’s status as a nonliable publisher.

The new Congress needs to investigate and find out. Twitter is exempt from liability as a “publisher” because it is allegedly “a forum for a true diversity of political discourse.”  That does not appear to be accurate.

Hawley alluded to Section 230 of the Communications Decency Act in his tweet, which does not hold online companies legally responsible for the speech they host or republish.

“No provider or user of an interactive computer service shall be treated as the publisher or speaker of any information provided by another information content provider,” the law reads.

Kelly told Hill.TV that the tech giant is a publisher rather than a platform.

“They’re clearly a publisher, and they want to be treated under the law like a platform, but a platform is simply an open forum where people, as long as they’re not promoting violence, can post whatever they want to post. That’s clearly not the case,” he said.

Twitter lists permanent suspensions as its “most severe enforcement action,” although permanently suspended users have the option of appealing if they believe the suspension was made in error.

Kelly’s ban quickly caught the interest of other high-profile political figures. Sen. Ben Sasse, R.-Neb., expressed concern over what he said is a larger trend in American society of silencing free speech.

Jesse Kelly can’t stand me. And I think his tribal war scalping stuff is stupid and wrong.

But that doesn’t matter much compared to the bigger picture here: The trend of de-platforming and shutting down speech is a bad precedent for our free speech society. https://t.co/V11v6uDZY3

Upon hearing of Kelly’s return to Twitter, Hawley again reiterated his demand for Congress to investigate the matter, calling for Twitter CEO Jack Dorsey to testify in front of lawmakers, under oath.

Good. Now I look forward to @jack’s full explanation, and how Twitter’s recent actions fit with his testimony to Congress. Under oath. Scrutiny needed here. https://t.co/PAKGMsA32a

Hawley, who currently serves as the attorney general for the state of Missouri, was an intern at The Heritage Foundation through its Young leaders Program in the summer of 2000.