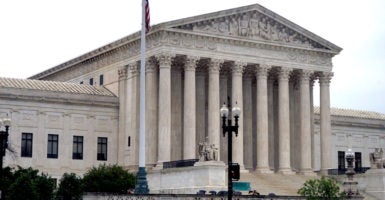 Among the issues that the court will address are whether half of Oklahoma is an Indian reservation, excessive fines, and double jeopardy. (Photo: World History Archive/Newscom)

After a two-week break, the Supreme Court has returned to hear its final round of cases for 2018.

Among the issues that the court will address are whether half of Oklahoma is an Indian reservation, excessive fines, and double jeopardy.

The following are three cases to watch in the Supreme Court’s last sitting of the year:

Is half of Oklahoma an Indian reservation? That’s the argument Dwayne Murphy is pressing to challenge his conviction in state court for mutilating and murdering his romantic rival in Henryetta, Oklahoma.

The only problem for Murphy is that Congress disestablished the Creek Nation, along with several other Indian tribes, when it created the state of Oklahoma in the early 1900s. Oklahoma was granted statehood in November 1907.

But applying a three-part test established in Solem v. Bartlett (1984), the U.S. Court of Appeals for the 10th Circuit agreed with Murphy, finding that no federal statute “expressly terminated the Creek Reservation”—despite a series of laws that dismantled the Indian territories in Oklahoma and stripped the tribal governments of any meaningful authority.

Now at the Supreme Court, Oklahoma argues that affirming the lower court’s ruling would transform 19 million acres of Oklahoma into Indian country and “plunge eastern Oklahoma into civil, criminal, and regulatory turmoil and overturn 111 years of Oklahoma history.”

The Supreme Court will hear arguments in the case on Nov. 27.

Most people would probably be surprised to learn that not all the guarantees in the Bill of Rights apply against state governments.

Though the Supreme Court made clear in Barron v. Baltimore (1833) that these rights restricted only the federal government, subsequent Supreme Court decisions starting in the 1920s incorporated many of these guarantees against state governments.

Today, like the federal government, states may not abridge free speech, establish official religions, or engage in unreasonable searches and seizures.

There are a few provisions of the Bill of Rights that have not been applied against the states, and one of those is the Eighth Amendment’s prohibition on excessive fines.

In a case upholding Indiana’s forfeiture of Tyson Timbs’ $40,000 Land Rover in connection with his arrest for dealing heroin, the Indiana Supreme Court ruled that the states are not bound by the Excessive Fines Clause.

At the U.S. Supreme Court, Timbs argues that his car is worth four times the potential monetary fine he faced, and such a forfeiture is “grossly disproportionate” in violation of the Excessive Fines Clause.

He maintains that this prohibition should apply to the states because, like the Eighth Amendment’s prohibitions on cruel and unusual punishment and excessive bail, a ban on excessive fines is deeply rooted in our nation’s legal history.

The court will hear arguments on Nov. 28.

The Fifth Amendment’s Double Jeopardy Clause provides that people may not be prosecuted more than once for the same crime—but the Supreme Court carved out an exception in the 1950s, allowing prosecutions in state and federal courts for the same conduct.

In Abbate v. United States and Bartkus v. Illinois, the court determined that the Constitution does not prohibit dual prosecution by separate sovereigns, reasoning that conduct violating each sovereign’s law does not count as the same offense for purposes of the Double Jeopardy Clause.

In 1959, there were relatively few federal crimes, and successive prosecutions in state and federal court were rare. But today, there are approximately 5,000 federal crimes and countless federal regulatory offenses—many of which overlap with state crimes.

Terance Gamble, a felon, was prosecuted in Alabama state court for violating the state’s law barring felons from possessing firearms and was sentenced to one year in prison.

Then, he was charged in federal court for violating the federal ban on felon in possession. He was sentenced to almost four years in prison and three years of supervised release. Gamble challenged the federal conviction as a violation of the Double Jeopardy Clause.

Justices Ruth Bader Ginsburg and Clarence Thomas have noted concerns about the “harassment of multiple prosecutions” in state and federal court. Thus, if the court overrules the separate-sovereign exception, it might be with an unusual coalition of justices.

Arguments for this case will be held on Dec. 5.

These are just a few of the important cases coming up at the Supreme Court. In the first part of 2019, the justices also will hear cases involving the Trump administration’s inclusion of a citizenship question on the 2020 census form, an Establishment Clause challenge to a nearly century-old World War I memorial, and whether the 21st Amendment authorizes states to place residency requirements on retailers seeking a license to sell alcohol.