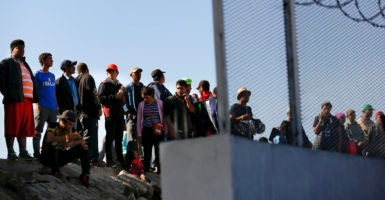 On three past occasions, presidents temporarily closed the southern border, something President Donald Trump threatened Monday to do permanently.

Presidents Richard Nixon and Ronald Reagan both closed the border over drug-related issues that halted entry from Mexico into the United States.

President Lyndon B. Johnson, shortly after taking office amid crisis, closed the border after the assassination of his predecessor, John F. Kennedy.

While Johnson’s example was unique, all three cases dealt with a president’s authority to act on the border during an emergency. The Trump administration has determined that the series of “caravans” of thousands of Central American migrants headed to the border is an emergency.

With Nixon in 1969 and Reagan in 1985—as is the case today—the United States was trying to pressure the Mexican government’s law enforcement into stepping up its efforts.

Mexico should move the flag waving Migrants, many of whom are stone cold criminals, back to their countries. Do it by plane, do it by bus, do it anyway you want, but they are NOT coming into the U.S.A. We will close the Border permanently if need be. Congress, fund the WALL!

Before boarding Marine One on Monday afternoon, Trump told a gaggle of reporters: “Mexico wants to see if they can get it straightened out, but we’ve, during certain times as you know, closed the border. … Here’s the bottom line, nobody is going to come into this country unless they come legally.”

The American Civil Liberties Union, which has sued the Trump administration on multiple fronts—gaining a recent lower court victory halting the administration’s asylum policy—declined to comment for this report. However, the organization is calling for Congress to pull funding from the Department of Homeland Security amid the border crisis:

Trump’s obsessive, racist crusade against immigrants will continue until Congress is willing to step up.

By December 7, Congress must decide whether they will increase @DHSgov’s budget or not. An agency that tear gasses children shouldn’t get a raise.https://t.co/kqSTCdGL1N

Trump told reporters that Border Patrol agents “had to use” tear gas against a large group of migrants who were rushing them at the border at Tijuana.

However, Arthur, a resident fellow of law and policy at the Center for Immigration Studies, said he doesn’t doubt lawsuits could ensue.

“Anything can be litigated,” Arthur said. “It could either be a citizen who wants to go to Mexico or a transportation company suing over travel. But the president has broad authority under 215a. A district judge could always grant an injunction, as they’re not shy to do. But this would survive judicial review.”

“There is no question that President Trump has the legal authority to close the border; that has been done by previous presidents with no one questioning that authority,” von Spakovsky, a former Justice Department lawyer, told The Daily Signal. “Any lawsuit to prevent this would be a frivolous lawsuit with no merit.”

Trump already has put the military at the border and said it is authorized to use lethal force if necessary. But the administration hasn’t sealed off the entire southern border as was done in past closings in attempts to block all entry into the United States.

In November 1963, the U.S. Immigration Service closed the border along Mexico to keep anyone from entering or exiting the country.

The move occurred as a national emergency in response to the murder of President John F. Kennedy in Dallas. The fact that the assassination occurred in a border state made the matter more pronounced.

New President Lyndon B. Johnson issued the order in extraordinary circumstances, and the Mexican government also closed the border.

The U.S. cited the Immigration Departure Control Law, saying the closure would remain in effect until Kennedy’s killer was found.

Myles J. Ambrose, then commissioner of the Customs Bureau, launched the operation that both The Washington Post and The Boston Globe—left-leaning newspapers—deemed to be successful in accomplishing a larger goal.

This came when the Nixon administration determined that the Mexican government was taking little action to stop marijuana trafficking from Mexico into the United States.

Federal agents searched vehicles, and reportedly strip-searched some drivers, near U.S. ports of entry at the Mexican border, causing a massive traffic backup that left motorists in a standstill for hours.

Nixon launched the mission as a surprise on a Sunday afternoon, with thousands of U.S. agents showing up to reinforce the border.

For two weeks, border regions from Texas to California reportedly lost tens of millions of dollars from their local economies and Nixon faced political pressure to end the operation.

The Boston Globe reported that “almost no marijuana was seized” because Mexico’s drug traffickers simply shifted to new and safer air supply routes. In October, Nixon formally ended Operation Intercept, but as the Globe stated, “The plan worked.”

That’s because the goal was to convince Mexico to cooperate in fighting the drug traffickers. And Mexico stepped up.

The Globe article continued: “Indeed, by early 1970, Operation Intercept had morphed into the fuzzier Operation Cooperation, and the Mexican government was no longer turning a deaf ear to Nixon’s demands.”

The Washington Post wrote: “The operation was discontinued after a few weeks because of fraying relations between the two countries. But the point was made, and Mexican law enforcement agencies increased efforts to stop drug shipments.”

During the first year of his second term, President Ronald Reagan enacted a similar policy, this time using the military at the border after a Mexican drug cartel abducted a U.S. Drug Enforcement Administration agent.

The stated goal of the mission, which effectively shut down all U.S. ports of entry along the border with Mexico, was to try to find Camarena or obtain information and those with information about what happened to him.

No one seriously believed that Camarena, an 11-year DEA veteran, would turn up in the search. Instead, the border operation was the Reagan administration’s way of trying to force the Mexican government of President Miguel de la Madrid Hurtado to step up its hunt for the missing agent. According to Mexican officials, the search was already being pressed hard, with 1,000 heavily armed police agents scouring the states of Sonora, Sinaloa and the Baja Californias.

Camarena, stationed in Guadalajara, was taken at gunpoint less than two blocks from the U.S. consulate. The abduction wasn’t reported for 18 hours, according to Time.

The DEA agent’s body was found in March 1985, showing signs that he had been gruesomely murdered.

The body was wrapped in plastic bags. The Washington Times reported:

Over a 30-hour period, Camarena’s skull, jaw, nose, cheekbones and windpipe had been crushed. His ribs were broken; a hole was drilled into his head with a screwdriver. The agent had been injected with drugs to ensure he remained conscious during his torture.