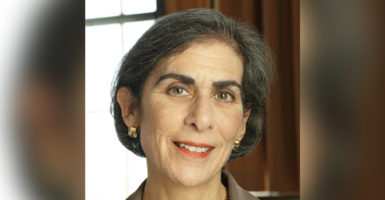 "Professors who hold unpopular positions or state inconvenient facts are now considered psychologically toxic," says Amy Wax, a professor at the University of Pennsylvania Law School. One of her fixes: No one on campus should be allowed to accuse others of being racist, sexist, xenophobic, white supremacist, or the like. (Photo courtesy of Amy Wax)

Wax has a bachelor’s degree from Yale College, a medical degree from Harvard, and a law degree from Columbia. But none of those was enough to exempt her from being on the receiving end of a full-fledged campaign to get her fired. Nor was arguing 15 cases before the Supreme Court on behalf of the Justice Department, but that’s beside the point.

Wax doesn’t fear being called racist, sexist, or xenophobic, probably because she’s been called many of those names before. Instead of retreating to the safety of her tenure when things get tough, she doubles down—demanding debate, evidence, and accountability.

Students and colleagues alike have attacked Wax for making the apparently offensive case that traditional marriage values lead to better results for children, and for putting forth the radical argument that many of the country’s problems are a symptom of the breakdown of the “bourgeois culture” (the 1940s and ’50s way of life).

In making that argument, Wax addressed the fact that things weren’t perfect back then, but like clockwork, her critics called her “racist and classist” anyway.

The straw that really broke the camel’s back, however, happened when student activists searching for dirt on Wax unearthed a 2017 podcast interview she did with economist and Brown University professor Glenn Loury.

In the interview, Wax said this when addressing the issue of affirmative action: “I don’t think I’ve ever seen a black student graduate in the top quarter of [my] class, and rarely, rarely, in the top half. I can think of one or two students who scored in the first half of my required first-year Civil Procedure course.”

Grades at the University of Pennsylvania are name-blind (meaning the instructor covers up students’ names prior to grading), so Wax says it’d be impossible to discriminate.

In a Nov. 8 speech at The Heritage Foundation, Wax talked about the fallout of her politically incorrect statements in depth, and put forth tangible ideas about how to counter a radical, identity-based grievance culture that’s now rampant in university life.

First and foremost, Wax said, “Remind students that one of the central missions of the university, which justifies its existence, is to get at the truth.” She said:

That requires honest debate, patience, intellectual honesty, investigation, and a lot of hard work. But it also is not for the faint of heart. And that is a lesson that is almost never transmitted today. That offense, bruising thoughts, and unpleasant facts simply go with the territory. They are an intrinsic feature of an open society, and they never can be entirely avoided.

Next, Wax argued for censorship of speech—but not in the way you might think.

Here are her ideas, implemented as guidelines in her seminars and upper-level classes, lightly edited for clarity:

No one can be heard to say, ‘I’m offended.’ They all have permission to be offended. But they just can’t express it.

No one is allowed to accuse anyone else, in the classroom or out, dead or alive, of being racist, sexist, xenophobic, white supremist, or any other derisive, identity-based label. No slurs or name-calling. These don’t enlighten, educate, or edify. They add nothing. Give us an argument. Tell us why the other person is wrong.

No one can complain to administrators—those officious thought police—about anything said in class.

Finally, both the government and private donors need to rethink the lavish financial support for higher education, and especially for elite and selective institutions, which serve only a teeny-tiny portion of our population and which in many ways, I’m afraid, have become an anti-Western and anti-American liability.

How can we get the rich to see that supporting elite universities today might not be the wisest and more fruitful uses of their hard-earned money? What we need is a list of alternative causes and alternative institutions and goals for their money that help ordinary, average, unspecial people who have been unduly neglected by our elites and our increasingly walled off from them.

“The question is whether there’s any hope of such protocols being implemented on a wide scale. In the current climate, I doubt it,” she said.

Until then, she expects the threat against politically incorrect professors will get worse.

If their presence causes offense, distress, feelings of insult, fears of ill treatment, that is enough to eject them from the classroom. And of course, these perceptions and feelings are subjective, they are self-confirming, they are immune from challenge. It’s all in the mind of the beholder. And the beholder’s mind reigns supreme.

Hear more from Amy Wax in The Daily Signal’s upcoming edition of “Problematic Women,” where we ask her about #MeToo, feminism, and gender roles.